changes of the management of, and control over, municipal systems and services in Jerusalem. 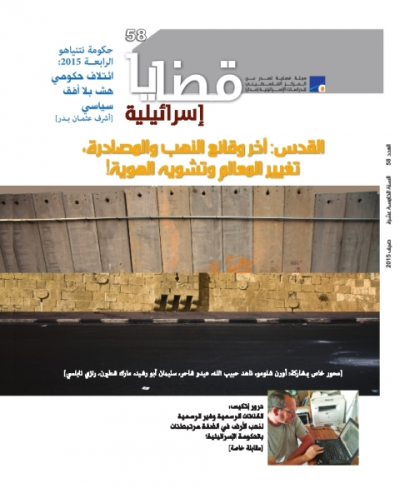 Oren Shlomo, Israel’s governtality of Jerusalem in the post-Oslo period

This article examines changes of the management of, and control over, municipal systems and services in Jerusalem. Changed measures have been in place since the peace process collapsed or since the beginning of the new millennium. The viewpoint presented by Shlomo does not analyse separatism in space and performance between Israelis and Palestinians in the city, representations and resistance of exclusion and colonisation, or potential settlements of reconciliation in the city. These viewpoints have been examined and oftentimes presented in research initiatives preoccupied with municipal relations between

Palestinians and Israeli in the city. Instead, Shlomo goes on to interpret and trace the impact of the work of the “soft” and concealed power, which is encapsulated with the Israeli control over Jerusalem. This is evident in the measures of management and control over municipal agencies and services.

Ido Shahar, Legal Sovereignty in theory and practice: A look into the interrelations between the Israeli and Jordanian Sharia courts in Jerusalem
Shahar claims that the organisational interests of the Israeli Sharia courts and their relations with the Jordanian courts have provided an incentive to adopt a judicial policy that, in effect, undermines Israeli sovereignty and strengthens Islamic and Jordanian–Palestinian elements in Jerusalem. In other words, despite Israel’s ostensible legal sovereignty in the city, in one important socio-legal domain - the domain of personal status and family law - the lives of Muslim residents of Jerusalem are shaped today by the Jordanian law of Personal status, no less than by Israeli legislation.

Suliman Abu Irshaid, Jerusalem under the weight of Judaisation: Settlement associations tear the city apart
Abu Irshaid provides an overview of activities carried out by settlement associations in Jerusalem. In a way or another, these associations serve as official Israeli arms, through which the Israeli government acts in locations and courses. Had the government of Israel exercised them directly, these activities would have caused it significant embarrassment on the international scene. Settlement associations achieve cross-cutting goals of the official Israeli policy and of the ultra-orthodox, extremist and ideologically stringent settlers. Accordingly, a minimum cost and losses is incurred on the international and Arab arenas as well on the internal Israeli level itself. Especially Elad and Ateret Cohanim, settlement organisations are basically active in the Old City, around the Al Aqsa Mosque compound, and adjacent neighbourhoods, including Silwan and Sheikh Jarrah. These organisations seek to Judaise those areas which comprise the narrow circle or historical hub of Jerusalem. Targeted Palestinian areas have already been engulfed by an extensive settlement ribbon.

Marik Sheteren, Neoliberalism, occupation and new spaces of encounter: Palestinians and Israelis in West Jerusalem’s shopping malls
Sheteren stresses that Jerusalem presents an extreme case of multiple polarisation in a city space. It is a case that includes national, religious and cultural conflicts at the same time. Jerusalem is distinctive of deep-rooted prototypes of space separation and biased planning policy, which reproduces flagrant, disproportionate power relations between the Jewish majority and Arab minority. These escalate a strongly explosive conflict, whose regular explosions dominate life in the city. At the same time, however, Jerusalem has been subject to significant neoliberal reforms, which reshaped municipal administration policies and urban economy. Over the past two decades, Jerusalem has seen a decline of municipal services, commercialisation of city life, and upgrading of social and spatial polarisation between social groups and sectors.

Articles
Ashraf Othman Bader, Netanyahu’s fourth government, 2015: A fragile government coalition, without a political horizon
Investigating impacts of forming Netanyahu’s fourth government (2015), this investigation is informed by two basic premises: (1) The current government coalition is fragile and will collapse before its legal term expires; and (2) the government lacks a political horizon and will implement a policy for management, rather than resolution, of the conflict. Bader uses a descriptive, investigative and analytical methodology based on an examination of some texts and reports.

Hillel Cohen, The life and death of the Jewish- Arab: the Land of Israel and beyond
In this article, historian Hillel Cohen seeks to uncover the process of what he calls “formation and death of the Jewish-Arab identity”, tracking its stages throughout the brief history in Palestine before Zionism emerged, the start of European immigrations, towards our present day. Although Cohen asserts that the “Jewish-Arab” identity has died and vanished, in the very last lines of his article he retracts and admits that “identities are naturally dynamic”. In view of the rising debate in Israel over recent decades, this identity in particular “is still possible, even for some at least”.

Yuval Evri, “Authentic alienation” - On Ars and Freḥa stereotypes in the Israeli culture
Evri discusses the use of “Ars and Freḥa” terms in the Hebrew culture as a tool of categorical classification of identities and as part of the national project. These terms are attributed to a broad segment (mostly to persons of oriental origin, and sometimes to immigrants from the Soviet Union or members of low classes without a relation to ethnic origin). Embracing a restrictive, general definition and based on prejudgements, these stereotypes position target categories on the lowest rank of ethnic, class and societal hierarchy.

From the Archive
Merit de-Nur, Correspondence between Rabbi Yitzhak HaLevi Herzog and David Ben-Gurion about the recruitment of the religious schools’ students in the first decade following establishment of the State of Israel
Recruitment of young Haredi (orthodox Jewish) students of religious schools (Yeshivot) for military service in the Israeli army continues to be a source of profound debate, as well as a hub of political, cultural and social dispute within the Israeli society. Most often, it takes on the heading of a “cultural war” between seculars and religious Zionists (who embrace the slogan of “sharing the burden on an equal footing”). On the other hand, Haredi Jews view the demand to recruit their young children in the military service as a “war on the study of Torah”. The two letters published here are a literal translation of the originals. The first is sent by the Chief Rabbi of Israel Yitzhak HaLevi Herzog to Prime Minister David Ben-Gurion. The second is the latter’s reply to Herzog. Dating back to 1958, both letters cast light on the deep-rooted and sharp causes of the dispute over this issue. They also highlight that recruitment of religious schools’ students predates establishment of the State of Israel.

Readings
Ali Haydar, The years constituting the Israeli judicial system
A preview of a new Israeli book The Israeli Law: Constitutive Years 1948-1977, authored by Ron Harris, Dean of the Faculty of Law at the Tel Aviv University. Holding a Ph.D. degree in history from Columbia University, New York, Harris is a key researcher in British legal-economic history and comparative law. He is one of the researchers who established and developed the discipline of legal history in Israel.