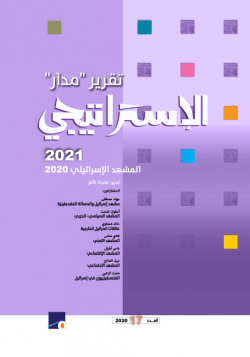 Ramallah: The Strategic Report 2021 – Israeli Scene 2020 of the Palestinian Forum for Israeli Studies (MADAR) has concluded the Israeli developments present a contradictory picture. Although it is in internal crisis, externally, Israel appears as a powerful state, acting like a “regional superpower”. Held on 23 March 2021, results of the latest elections (the fourth in two years) have further exacerbated and deepened the political disintegration. Supporters of the Netanyahu and opposition camps have failed to win an adequate number of Knesset seats to form a narrow and stable coalition, making a fifth round of elections a potential scenario.

Via Zoom, MADAR announced the release of its Strategic Report 2021 in Ramallah on Wednesday, 14 April 2021. Causes of the Israeli electoral crisis go beyond partisan conflicts. These are an outcome of profound internal shifts in Israel. As the one-group dominance demised, multiple groups have emerged and competed for that dominance. This means that the crisis is not a transient event, but a product of structural changes which will have long-term reflections, particularly on the conflict and occupation.

According to the report, internal uncertainty and rise of regionalism are reflected in Israeli strategic readings of 2020. These are of the view that, in 2020, Israel did not face any strategic existential threat. Israel is in command of a virtually free military and security activity in the surrounding region. However, as a consequence of the COVID-19 pandemic and ongoing political crisis, Israel is facing an internal strategic threat, which can weaken and undermine trust in state institutions. Accordingly, the “Israeli domestic system” has, for the first time, become a source of threats and risks that may jeopardise national security and compromise collective “immunity”.

2020 was marked by an intersection of three extraordinary factors, which contributed to shaping the Israeli scene and setting Israeli domestic, regional, and foreign relations. These included the presence of Donald Trump as US President in an election year, ongoing domestic political crisis, and spread of the COVID-19 pandemic.

These factors partly changed at the end of 2020 and beginning of 2021. Having launched a large-scale vaccination campaign, Israel has demonstrated positive signs of containing COVID-19. The turbulent era of Trump, who identified with Netanyahu, came to an end. Trump was replaced by the Democrat Joe Biden, marking a transition to a new phase that has so far been dominated by a US caution and Israeli concern about future repercussions of the Trump-Netanyahu relationship. These changes coincide with an International Criminal Court (ICC) decision on initiating investigation into war crimes committed in the Palestinian territory.

The report anticipates that these developments will have significant reflections on Israel’s policies towards the question of Palestine in the future, and management of the conflict in particular. They could curb Israel’s aggressive regional power, which characterised the Israeli policy in 2020. The ICC decision is envisaged to bring the Israeli occupation and settlement activity in the West Bank back to the international stage.

Monitoring political disintegration, the report reviews the swelling number of parties that passed the electoral threshold in the latest elections, jumpstarting from eight to 13 lists. The Joint List and Yamina split into two lists each. Gideon Sa’ar defected from the Likud and formed a new party. Kahol Lavan [Blue and White] disintegrated into two parties: Kahol Lavan and Yesh Atid [There is a Future]. Once again, the Labour-Meretz alliance also broke up into two lists, namely, the Labour and Meretz parties.

According to the report, one of the most important outcomes of the latest elections is the whitewashing of extremist Kahanist parties, which Netanyahu worked hard to merge with the Religious Zionist list for future support. Should Netanyahu manage to form a narrow right wing coalition, efforts to liquidate the question of Palestine, already spearheaded by Netanyahu, are expected to be further promoted.

The Netanyahu-led right wing has managed to screen Arab lists into what it believes to be extreme and moderate, considering that the United Arab List was a representative of the moderate wing. Accordingly, Netanyahu has readjusted his discourse towards the United Arab List, viewing it as a legitimate list, and can thus be a partner in a coalition he leads. By contrast, the United Arab List has sufficed with making demands and given up on the nationalist discourse.

The report accounts for Israeli parties’ growing interest in the Arab electorate, representing some 1 million (15 percent) voters. In the March 2020 elections, the Joint List won almost 87 percent of Arab votes. However, public opinion polls indicated that the Joint List would recede from 15 to 10 members of Knesset due to internal disputes. In this context, Jewish party leaders grabbed the opportunity and won these lost votes.

On the regional level, the Abraham Accords were announced at an unprecedented moment of the aggressive regional power gained by the Israeli right wing. Geo-strategically, Israel has taken position in the regional alliance map as part of the moderate Sunni axis. This was reflected in expanding Israeli military activity, attacking targets considered by Israel as “hostile” in Syria, Iraq, and Iran, and extending land and air strikes to the sea as well. On the Palestinian stage, that activity manifested in a pursuit to liquidate the question of Palestine in line with the Deal of the Century, which was aligned with and assisted by the Israeli right wing perspective. In conjunction with the annexation scheme, Israel attempted to impose the “peace for peace” principle, as coined by Netanyahu, vis-à-vis the “land for peace” rule.

The report provides an analysis of Israel’ aggressive regional power. Together with the extraordinary Trump Administration and Israeli military and technological superiority, additional objective factors have contributed to this power. These included a vulnerable Arab strategic position, the internal Palestinian political divide, failure to pay the price for the occupation, regional strategic situation, war of axes and alignments, and Israeli alliance with states on the margin in Europe, populist regimes, and global right wing.

Supported by white supremacists, Zionist evangelicals, and populist right wing, the absolute Netanyahu-Trump alliance affected ties between Israel and the American Jewry. The majority of American Jews vote for the Democratic Party, adopt generally liberal positions, and raise concerns about the anti-Semitism and racism exhibited by a portion of the Trump audience. Compared to 30 percent who favoured Biden, 70 percent of Israeli Jews believed that Trump was the best for Israel.

Israel has relentlessly worked towards building relationships with EU member states on the margin. These are typically dominated by the right wing and give weight to domestic policies and national priorities over the unifying EU regional policies. These include Poland, Czech Republic, Hungary, Slovakia, Balkan states, Bulgaria, and Romania. Israel’s relations with these countries push for disrupting the unanimous adoption of decisions on the question of Palestine and inducing them to move their embassies to Jerusalem.

The report concludes that some factor partly changed towards the end of 2020 and beginning of 2021. Internally, it seems that Israel is in the process of surviving the COVID-19 crisis, but sliding into a deeper political crisis, as demonstrated by the fourth election results. Externally, the Trumpian era came to a resounding end, albeit leaving internal scars. Power transitioned to the Democratic Party, which has increasingly relied on multi-ethnic grassroots. In this context, the Trump-Netanyahu symmetry has become a source of tension with and concern about the new US Administration as well as with the American Jews. The ICC made an extremely important decision to launch an investigation into war crimes perpetrated in the Palestinian territory. This implies the possibility that Israel’s aggressive power against Palestinians, including settlement activity, Judaisation policies, and Trump-Netanyahu symmetry, can be turned into an opportunity to strengthen Palestinian struggle and move towards ending the occupation.
3
The MADAR Strategic Report monitors and analyses key events and developments on the Israeli scene every year. The report seeks to explore the course of developments over the upcoming period, particularly from the perspective of their influence on the question of Palestine and Palestinian people.

An Executive Summary provides an overview of major strategic changes, which impact Israel and its internal and regional standings. It is hoped that the report shed light on the Israeli scene, including relevant key influencing factors.

More in this category: « STRATEGIC REPORT 2020