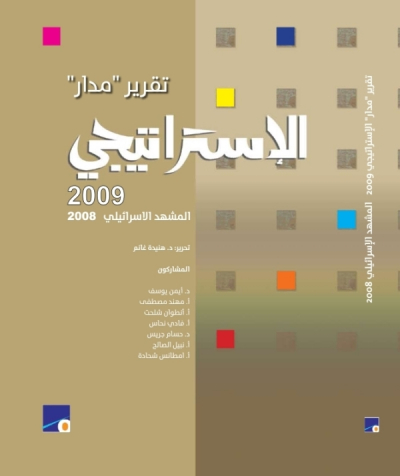 Through monitoring and analysis, MADAR Strategic Report overviews the most important events and variables that did impact the Israeli scene during 2008. The analysis focuses on six spheres: Israeli external relations sphere, political sphere, security and military sphere, economic sphere, social sphere and the Palestinians in Israel sphere, in addition to the executive summary of the report.

A specialized group of researchers supervised the preparation and drafting of the report. They adopted an objective and prospective reading of the events characterizing 2008.

The report accentuates the fact that 2008 witnessed a number of crucial international and local events that eventually, will seriously influence Israel and its future options. The most significant among them is the election of the American President Barak Obama and the global economic crisis, in addition to the war on Gaza, which took place along with an intensifying shift of the Israeli society toward the right and the extreme right, and almost total collapse of the Zionist left(Labor party and Meretz). Such a situation has been reflected by the results of the latest Israeli elections.

The election of Obama and what it entails regarding the different views in dealing with international issues, presents a new challenge for the Israeli external policy vis- a- vis the latter’s confrontation of two major issues; the Palestinian file and the Iranian nuclear file . regards the Iranian file, the report sees that Israel is apprehensive when it comes to American diplomatic preferences, henceforth; it is proceeding with its policy to prepare its military choices on the basis of possible of the failure of a diplomatic solution.

With regards to dealing with the Palestinian question, the report sees that the active involvement of the American Administration in Israeli-Palestinian negotiations, on the basis of the Road Map and the Annapolis process, while

having an obstinate and rightist Israeli government, will practically open the door for further disagreements between the American and Israeli administrations.

Nevertheless, the report does not expect that these disagreements would reach to a confrontational level or that they would even harm the strategic alliance between them. In contrast, it is possible that such disagreements will be concretely related to specific issues and will not necessarily turn into a comprehensive confrontation between the two administrations.

Economically, the global financial crisis started to have its effects on the Israeli economy. Even though it is still early to predict the true impact of it, according to assessments of major economic groups in the ministry of finance and the banking and industrial agencies, Israel will be facing a period of large economic stagnation. This economic stagnation will be followed by a slowdown in consumer production, a freeze of salaries and major discharges of employees, doubling of unemployment fees, decreasing taxes, cuts in essential budgets such social welfare, health and education, and the decrease of purchases and preference to buy cheap products in addition to the decline in the stocks prices.

The war on Gaza became a critical event on the local, internal and regional levels. During this war, Israel’s strategic military dilemma became more pertinent as it became evident in the absence of a clear military strategy to cope with informal military organizations. Israel tried to escape this trap through its assertion that the objective of its war on Gaza was not to eliminate Hamas, but to restore the consideration to its power of “deterrence”. This statement stems from the blunt recognition that the war was not waged in order to defeat the enemy and register a military victory over it, but rather to intimidate and weaken the enemy. This was manifested in the adoption of a “wild policy as a war policy” during the war on Gaza, whereas the state would appear as if it lost its self control, therefore, it gave an unlimited authorization to its military arm. This meant raising the ceiling of losses incurred by the enemy as well as petrifying it without paying attention to international legal restrictions or even taking into consideration the international legal differentiation between combatants and civilians. The report also sees that there might be future repercussions of which the most important among them will be: the escalation of future bloody confrontations, and a focus on restoring deterrence by using more power in the future. Such repercussions will be in tandem with a consolidated shift toward the right and the fascist right.