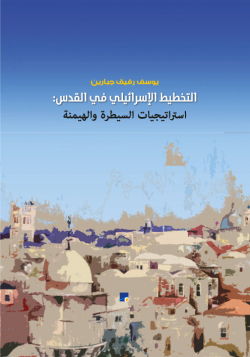 Ramallah: The Palestinian Forum for Israeli Studies (MADAR) has recently published Israeli Planning in Jerusalem: Strategies for Control and Hegemony by Yousef Rafiq Jabarin. Totalling 144 pages, the book is premised on the fact that the Israeli “hegemony planning” in Jerusalem is ideological. It does not take account of the Palestinians’ right and existence in the city. It is a geopolitical planning with long term purposes and objectives. Exhibiting a dark side, power is the backbone of the Israeli hegemony planning system. Most often, it employs military and economic measures, land policies and planning to achieve Israel’s goals.

In this book, Jabarin analyses the nature, goals and future vision of Israel’s strategies for control over Jerusalem. Uncovering long term goals concerning the future of the city, Jabarin concludes that the Israeli planning policy has, and continues to, play an unparalleled and unrelenting role in settling the case of Jerusalem with a view to ensuring its geopolitical future as an eternal capital of Israel proper.

Jabarin shows how the Israeli planning system in Jerusalem has been affected by several regulatory, legal, political and ideological factors. Combined, these influences have controlled and hindered the development of housing projects, public spaces, industrial parks and infrastructure networks in Palestinian quarters of Jerusalem. Substantial efforts and resources have been earmarked to develop the western and eastern parts of Jerusalem to be the capital of Israel.

Jabarin investigates and analyses structural maps and master plans developed for Jerusalem since 1948. While some addressed particular projects, structural maps covered the city either wholly or partly. Policies and tools were approved to implement these maps on the ground.
Despite the fact that the book covers a long time span of 66 years, the dominant policy of master plans and instructions for various maps and plans is tailored to achieve the goals of hegemony planning.

Key negative geopolitical, social, demographic, economic and physical projections of Israel’s policies in Jerusalem are summed up in a set of catastrophic outcomes. These include a massive destruction of 38 Palestinian towns west of Jerusalem in 1948, displacement of the population of New Jerusalem (known today as “West Jerusalem”), control over Palestinian neighbourhoods and distinctive modern Palestinian architectural heritage, and demise of the capital of Palestine. If it were not for the Nakba, the population of the capital of Palestine would have been 2 million. Since 1967, Israel has seized almost 64 percent of the Palestinian land in East Jerusalem. According to the Israeli Planning Law, more than 80 percent of Palestinians have also been incriminated. Nowadays, 44,000 Palestinian houses are unrecognised under the Israeli law. Demographically, East Jerusalem has been transformed into a “bi-national” area. Israel has made a remarkable success in creating a new demographic status in East Jerusalem since 1967. Today, the Jews comprise 43 percent compared to 57 percent of the Palestinian population. East Jerusalem has turned into separate, scattered cantons, including impoverished households. Not to mention challenges to establishing an independent Palestinian capital in East Jerusalem, Israel has created a new historical discourse that obliterates the millennia-long Palestinian existence in the city. Meantime, Palestinian strategic policies are lacking so as to confront the totalitarian hegemony planning system in Jerusalem.

Professor Yousef Jabarin completed his higher education in city planning at Harvard University. He lectured at the Massachusetts Institute of Technology (MIT). He is now a lecturer at the Technion – Israel Institute of Technology (Technion), Haifa. His research interests are in the areas of Israeli planning in the city of Jerusalem as well as in the Galilee, Naqab and West Bank. In theory, Jabarin published an extended number of academic articles and books on justice, city planning and sustainable development around the world.

More in this category: « Israeli urban Planning in Jerusalem Israel and the Apartheid »