Israel and the Apartheid

A View from Within 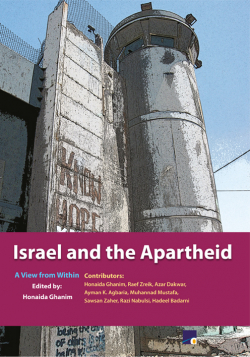 This volume presents a collection of analytical studies and articles by a group of Palestinian researchers. Contributions attempt to unveil analogies and differences between the Israeli governance system and apartheid regime of South Africa. Informed by the latest theoretical illuminations in the field of settler colonialism, nationalism and critical theory, the various studies included in this volume aim to understand subjugation dynamics and control practices , used by the Israeli authorities to construct, maintain and naturalize Jewish ethno-racial supremacy over the Palestinians in Israel/Palestine. The volume explores the religious, juridical and national discursive practices, which (re)produces, legitimize, and promotes hierarchical citizenship and reproduces it as a normative state and integral part of the Israel’s collective common sense.

In spite of the many similarities, studies that compare Israel to the apartheid regime reflect an intricate and complex system that goes beyond the South African apartheid model. This system integrates tools of ongoing settler colonialism and military occupation of over half a century, producing a distinctively heterogeneous control system that brings together and combines several components into a new mechanism of subordination.

More in this category: « Israel and the Apartheid Basic Law: Israel as the Nation- State of the Jewish People Facts and Dimensions »