The Demography of Israel 2015: New Implications 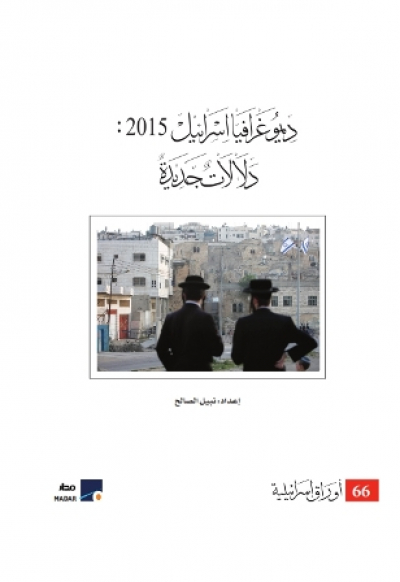 This paper provides the latest data on important demographic chapters in the Israeli state, which cover the population distribution according to affiliation, origin, religion, religiosity, and the population growth resources.

The paper also sheds light on the overpopulation percentage, the geographic distribution, and the distribution by sex, age, and marital status.
The paper notes an increase in Orthodox Jews, which points towards the Israeli society's movement towards further religiosity and fundamentalism, as opposed to the secularism on the other hand, alongside an increase in the average life span of men and women, which means, according to official estimates of the upcoming two decades, that serious changes will affect the composition of the labour force as well as the percentage of those dependant on governmental aid and social welfare. That is besides the demographic shifts that will leave deep traces on the nature of Israeli society, its economic development, its present and future social impenetrability, and especially its political culture.

The paper comprises a number of population growth estimates of the 25 years between 2010 and 2035 from the central bureau of statistics, the most important of which is that by 2035 the Israeli population is expected to reach 11.4 million people, should the annual population growth continue to be 1.6%. Jewish residents and “others” will form 77% of the overall population, and their number will reach 8.8 million people, while Arab residents will be 2.6 million people, and they will comprise 23% of the people. In other words, by 2035, the number of Jews will reach 8.3 million and will comprise 73% of the people, and its growth rate will be 1.4%, as opposed to 1.8% growth rate in between 2006-2010.