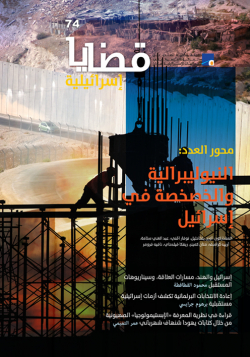 Much has taken place since Israel was established by its founders, who saw themselves as members of the socialist labour movement. These founders were of the view that the notion of social justice (within the Jewish community, of course) was a pivotal project and goal in their ideology and political practice. It seems that the halcyon days of the kibbutz had been long gone, however. As a socialist cooperative model, the kibbutz illustrated an advanced form of social and economic organising, as well as a distinctive feature and registered trademark of the State of Israel. When Israel was established, all state economic institutions, including in the health, mail, aviation, transportation and insurance sectors, were in the public domain. However, over the past three decades, neoliberal policies have managed to privatise and transfer these sectors to the private sector and individual property. All the more so, some apparently non-privatisable sectors, such as security and military facilities, have become prone to privatisation and profit-making.

Land tenure may be the last publicly-owned property in Israel. Approximately 94 percent of the land in Israel is continues to in the public domain (i.e. owned by the state, Jewish National Fund, and Jewish Agency for Israel). Nevertheless, privatisation of public land has taken an upward trend, albeit through complex legal processes. While they keep formal state ownership, these processes leaves land disposition, profit-making and acquisition in the hands of individuals and mega corporations.

Some believed, and continue to believe, that the market logic, which provides the grounds for profit-making, expansion and excess of authority, is in competition, and sometimes in conflict, with the introvert the ethno-religious Zionist logic. Nonetheless, a close look at the case of Israel shows that privatisation processes expanded to the benefit of capitalist sharks. However, as clearly seen over the past decade, privatisation has made a sharp turn towards the extremist, racist and religious right-wing movement. Although there are occasionally moments of tension, both logics reinforce each other. In a world and society with growing, accelerating and noticeable socioeconomic disparities, a transformation can affect the national religious discourse, which insists on the Jewish character of the state as exclusive to the Jews only. This discourse can be viewed as a form of the making of an illusory Jewish “we”, torn apart by class and social struggles. This way, the ethno-religious discourse compensates the oppressed Jewish classes with some form of a moral and symbolic capital. It makes these classes feel that even if they lose their material and economic status in society, they are still in possession of the moral and symbolic values of the state. They own the state itself, and nothing else. As such, instead of a clash between the logic of privatization and the ethnic logic, reality demonstrates how one feeds into the other.