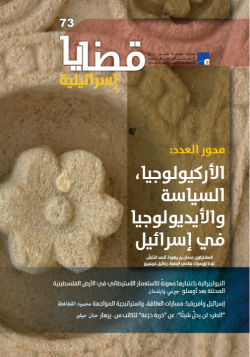 Conflict over Palestine has taken, and continues to take, several forms. First and foremost, it is a conflict over land (geography) and identity of the population (demography). In addition, it is a conflict over narrative and history. A review of the Declaration of the Establishment of the State of Israel demonstrates how intensive and concise this narrative is, unveiling the intellectual foundations of Zionism. This narrative has the advantage of being able to select, and skip, parts of the Jewish history as it wishes. The narrative begins with the Old Testament, but soon eschews from two thousand years of the Jewish history in the Diaspora and turns back to the twentieth century,

evolution of Zionism, Jewish Catastrophe, and establishment of the State of Israel, reflecting a return of the Jews to history. It attempts to draw a link between two periods solely, bypass other periods so that the history of modern Zionism appears as nothing but a new chapter in, and an extension of, the Old Testament. It is no coincidence that Ben-Gurion opted to celebrate the Independence Day of the State of Israel under the Jewish, rather than the common, calendar. It seemed as if he had lived in the time of Torah, which ran since time immemorial to his day. Along with King David and King Solomon, Ben-Gurion would exist at the same time and within the same chronology.

It is no surprise that an attempt is made to utilise archaeology to set the ground for this historical narrative. However, the same archaeological research has not accepted to be a mere ideological servant of a Zionist narrative. Many researchers who view themselves as Zionists have, therefore, reached conclusions that do not necessarily serve some common Zionist hypotheses.
Attempting to trace back thousands of years to establish a historical right to Palestine, this Zionist argument and obsession legitimise displacement of the indigenous Palestinians. It should not lure Palestinians into a historiographical competition over the history of this area and Palestinians’ right to live in their own homeland. Palestinians have lived, and continued to live, on their national soil, building and thriving in their own country. In essence, Palestinians did not need to go back to any ancient history or archaeological research to establish a connection with a homeland, in which they live, construct their homes, and tend their land. According to our poet Darwish, the Palestinian is so overloaded with evidence, which connects him to the homeland, that he has forgotten to look for it.