How could a demographic transformation be undertaken 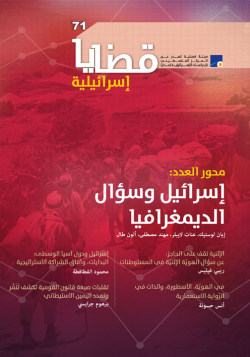 As part of a settlement enterprise, Zionism decided to establish a national home for the Jews in an already populated country. From the outset, this meant that this enterprise sought to transform the Jews into a majority and the Arab Palestinians into a minority. Without a transformation of this kind, it was impossible for Zionism to fulfil the promise it had made to its people, namely, self-determination in a state of their own. At first, the idea of a majority and statehood was esoteric. In the 1920s, a debate took place between political and cultural Zionism about whether the Jews should be the majority or be too many without constituting a majority. In the 1903s and 1940s, this debate was resolved in favour of Ben-Gurion. The statehood project was transformed into a declared programme, which was embraced by Zionism.

This was not the only concern, nor was it the entire formula. The pressing question was: A majority, where? In which geography, and in which area? In which part of Palestine? In Palestine as a whole? Palestine and Transjordan altogether?

A dispute arose within Zionism. Ben-Gurion was adamant about demography. Though differently from other insisting currents, Ben-Gurion was willing to provide some leeway for geography. Therefore, he attempted to concentrate settlement activity in particular areas, such as the coast, to guarantee a majority even in a limited space in Palestine. In his opinion, it was important, in the first stage, to establish a state even in a part of Palestine, no matter how large or small. It was, of course, preferable that it was large. As amply and convincingly analysed by Palestinian historian Nur Musalha, Ben-Gurion and his opponents were in agreement concerning the principle of More Land, Less Arabs.

Ideas were abundant. At first, it was thought that extensive mass immigration would achieve this goal. Immigration from Europe was never sufficient, though. With the Holocaust, would-be Jewish immigrants no longer existed. Gradually, the idea of transfer was more and more crystallised as the proper solution in the minds of Zionist leaders. In parallel, Jews of the Arab world would be brought in to guarantee the majority. As we know, both schemes were implemented: expulsion of the Arabs and bringing in the Arab Jews.

However, if the 1948 Nakba and consequent displacement had solved the demography problem for Israel, the 1967 occupation reproduced the question: What can be done to solve the demographic problem with the presence of millions of Palestinians in Historic Palestine. Military rule was the first answer, and the two-state solution was the second. Now, an attempt is underway to institutionalise the apartheid regime as a third solution. For Israel, this problem continues to persist.