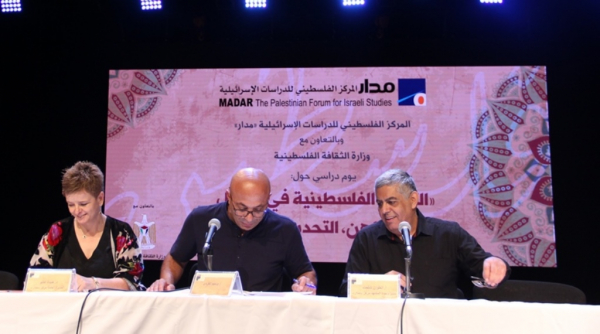 Ramallah: Under the auspices of the Ministry of Culture, the Palestinian Forum for Israeli Studies (MADAR) organised a seminar, titled The Palestinian Culture in the 1948 Territory: The Current Context, Challenges and Prospects in Ramallah yesterday. In this seminar, participants recommended that the current forms of cultural cooperation between Palestinians on both sides of the Green Line be enhanced. Cultural cooperation needs to be institutionalised so that it is no longer seasonal, but serves as an essential part of institutional programmes. To illustrate a case of real cultural partnership, cooperation will ensure developing joint projects, exchanging art performances, networking, recruiting support and building a database.

Along this vein, participants stressed the need for a concerted effort to overcome challenges to Palestinian culture in a context that witnesses more fragmentation, obstacles and targeting. Particularly in the 1948 territory, the State is escalating its war against the culture, which embraces Palestinian identity. By funding constraints, persecution and besiegement, the State attempts to strip Palestinian culture of the implications that express the needs and identity of the indigenous population.

The seminar aimed to monitor the current cultural context within the 1948 territory, with a particular focus on its expressions, tools, characteristic features and prospects. Several sessions comprised a series of focused presentations, studies and testimonies. The seminar also provided an overview of key cultural spaces in the 1948 territory, highlighting their key contributions and roles.

Participants reviewed the unstable stations, which have deeply impacted culture in the 1948 territory, starting with the Nakba, military rule, Naksa, Land Day clashes, and ending with the Oslo Agreements and ensuing events.
Discussants emphasised the role intellectuals in the 1948 territory play in producing a collective Palestinian national identity and narrative, which go beyond fragmented geopolitical borders.

Participants discussed internal predicaments, including conservative or politicised, religious culture, which occasionally attempts to assert custodianship over cultural implications. Most often, these challenges have managed to prevent some art performances by means of intimidation, Takfirism and defamation campaigns.
As a distinguished incubator of cultural events, the Haifa city is a case in point that helps diagnose the current context. According to participants, Palestinians in the city have created new cultural spaces that are immune to the state institutions’ hegemony. Affiliated with civil society organisations and private sector, these cultural spaces are hosted by cafés that have managed to attract a large audience from across the spectrum.

In the opening session, the Minister of Culture Ihab Bseiso described the seminar as a “new beginning” to more workshops and conferences, which take into account the principle of systematic culture planning and search for prospects of joint activity between institutions and individuals, including creative men and women, from across cultural sectors.

Bseiso expressed solidarity with Palestinian artist Mohammed Bakri, denouncing the statements made by the Israeli Minister of Culture against him. Bseiso described the Israeli minister as ignorant of history and racist. Bseiso was introduced by Dr. Ahmed Harb.
Dr. Harb stressed the importance and specificity of the seminar, which lays foundations for the future. A short film, Araq [Insomnia], by Palestinian director Qasem Khatib, was screened, presenting a panoramic view of Palestinian culture in the 1948 territory.

Titled Palestinian Culture in 1948 Territory: Developments over Various Stages, Distinctive Features, Themes and Changing National Role, the first sessions included talks by Antoine Shulhut, literary critic and researcher, and Dr. Honaida Ghanim. Shulhut made a presentation on “Palestinian Culture and its Images, Distinctive Features and Transformations since the Nakba: Milestones, Characteristics and Challenges”. Dr. Ghanim presented a study on “Culture and Production of the Collective National Identity after the Nakba and Subsequent Transformations”.

The second session, titled The Map of Cultural Production in the 1948 Territory over the Past Two Decades and Sociological Features, included three presentations: (1) Hisham Naffa’s “The Role, Centres and Pattern of Cultural Production and Performance”; (2) Mohammed Jabali’s “Cultural Production: Visual Arts; and (3) journalist and writer Ali Muwasi’s “Literary Production”. The latter was an illustrative study, which monitored the production of novels, poetry, short stories, plays, prose poetry and other types of literary production. Muwasi presented an analysis of key characteristic features, themes and topics of these cultural products.

Moderated by Saleh Dabbah, the third session was titled Cinema, Theatre and Music: Reality and Challenges. A personal testimony was delivered by Sameer Jubran, presenting his opinions on the interfaces and overlaps between art, identity and politics.

Dr. Nadeem Karkabi presented a study, titled The Palestinian City and its Cultural Role: Reality and Problems, reviewing the development of music and middle class in Haifa and highlighting the current context and problems. Bashar Murqus, Director of the Khashabi Theatre in Haifa made a presentation on “The Palestinian City in the 1948 territory: Does it Witness a Cultural Shift?”

Moderated by poet Mahmoud Abu Hashhash, the final session was titled Problems Associated with the Cultural Activity in the 1948 Territory and Tools of Mutual Empowerment for Change. This session included presentations by Iyad al-Barghouthi, Director of the Arab Culture Association in the 1948 territory, and Khaled Ilayyan, CEO of the Ramallah First Group and Chairman of the Ramallah Contemporary Dance Festival. These addressed a set of structural challenges to Palestinian culture and the way to avoid them through planning and institutionalisation, which ensure successful and sustainable outcomes.

Finally, Bseiso provided an overview of the “role the Ministry of Culture plays in supporting culture in the 1948 territory on several levels. This is the case of supporting Palestinian culture wherever creative Palestinian individuals are present.”