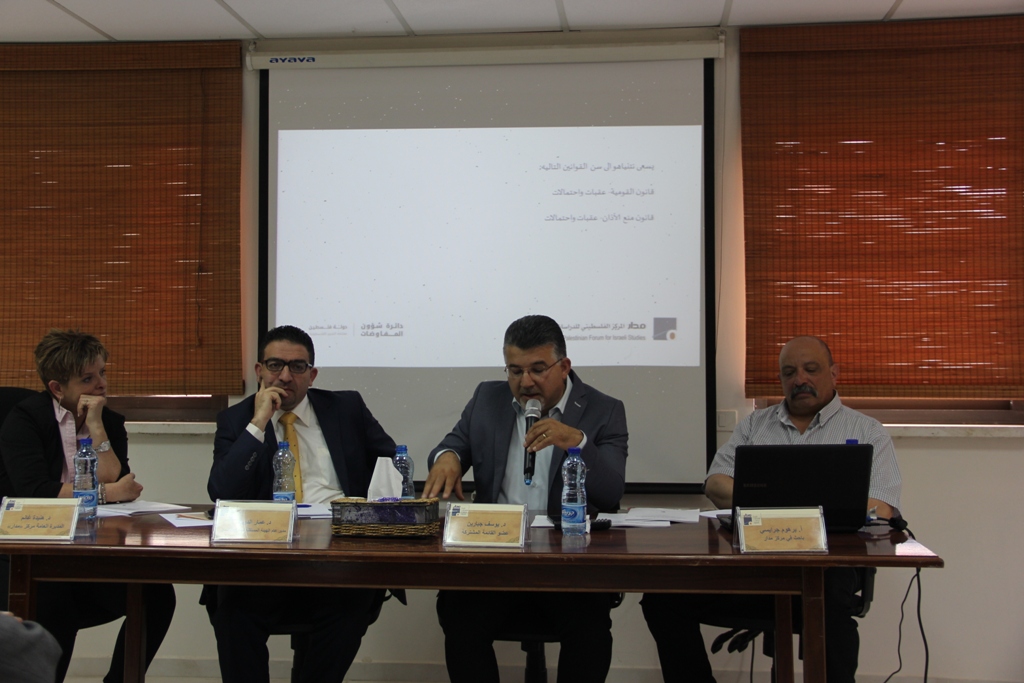 The 20th Knesset Report on Racist and Discriminatory Laws and Bills, Supporting the Occupation and Annexation

Over the three years of its parliamentary session, the Knesset enacted a total of 185 racist laws in support of the occupation and settlement activity.

A total of 32 bills were approved in the final reading. These included 26 separate laws. Six bills were included as provisions under four of the 26 approved laws.

In the third parliamentary year (May 2017–March 2018):
1. The Knesset approved six bills in the final reading. Another two bills were included as provisions under a law. Approved bills provide for tightening restrictions on Palestinian movement and access across the 1967 occupied territory and enforcing the Israeli law to the occupied West Bank.

2. Two bills were approved in the first reading. Of these, a bill provides for imposing restrictions on anti-occupation human rights organisations. Representatives of these organisations may not visit school students.

3. Seven bills were approved in the preliminary reading. These advocate for discrimination and restriction of political activity. The most dangerous of these is the Nation-State Law.

4. During the reporting period, members of Knesset (MKs) proposed 38 bills. The majority of these prescribe penalties against Palestinians of the West Bank and Jerusalem, place restrictions on political activity, and consolidate discrimination.

Since Donald Trump was elected as the US President, the Knesset has initiated a process to provide final approval and make laws, with the purpose of direct and indirect annexation.

The Zionist Camp and Yesh Atid (There is a Future) parties have increasingly supported proposed bills. This report highlights an ongoing rapprochement between Yesh Atid and the settler right wing camp.

A real opposition to the unprecedented wave of laws is limited to the Joint List and Meretz parties.

Political Scene
In mid-March 2018, the Knesset completed its winter session and third year of the 20th parliamentary term. Thanks to a stable and coherent coalition government, the 20th Knesset has broken with all past experiences of Israeli Knesset sessions, which faced the corruption of prime ministers. The coalition government has managed to score political gains with respect to racist laws in support of the occupation and settlement activity. In the economic sphere, the coalition government has approved the 2019 budget at an early stage. This success is underpinned by two key factors: (1) the current government is the best for the settler right wing, which is dedicated to its own agenda; and (2) profit and loss accounts of coalition parties, and of the coalition government as a whole. Combined, these factors are at work in the absence of a significant opposition to government policy.

Over the last weeks of the Knesset winter session, successive developments related to corruption cases against Netanyahu have bumped the settler right wing into what looked like a race. In this endeavour, the right wing seeks to enact the largest number of racist laws in support of the occupation and settlement activity. Extensive efforts were undertaken to enact the Nation-State Bill, which the Knesset approved in the preliminary reading on 10 May 2017. Ever since, all the attempts made by Netanyahu to present the bill for final approval have been in vein.

Only during the last week of the Knesset winter session, the Knesset’s special committee prepared the Nation-State Bill for the first reading. According to Netanyahu, the bill is a political paper, which he will uphold in the upcoming parliamentary elections. Over the last two weeks of the winter session, the Knesset was preoccupied with these elections. However, the coalition government kept its house in order and took early elections off the agenda. However, the crisis associated with the conscription of young ultraorthodox Haredi Jews was at the heart of the controversy between coalition parties. This crisis might resurge during the Knesset summer session, possibly forcing early elections back to the surface.

In regard of legislation, the subject of this report, the Knesset winter session was initiated with a particular focus on passing the Jerusalem Bill. By this legislative act, the coalition government intends to thwart any change to the status of Jerusalem, particularly the eastern part of the city occupied in 1967. Due to legal constraints, however, the coalition government was obliged to tighten the provisions of the bill. At the same time, the government sought to produce a less tight bill, undermining the legislative significance of the bill. This is further elaborated in a separate section of this report.