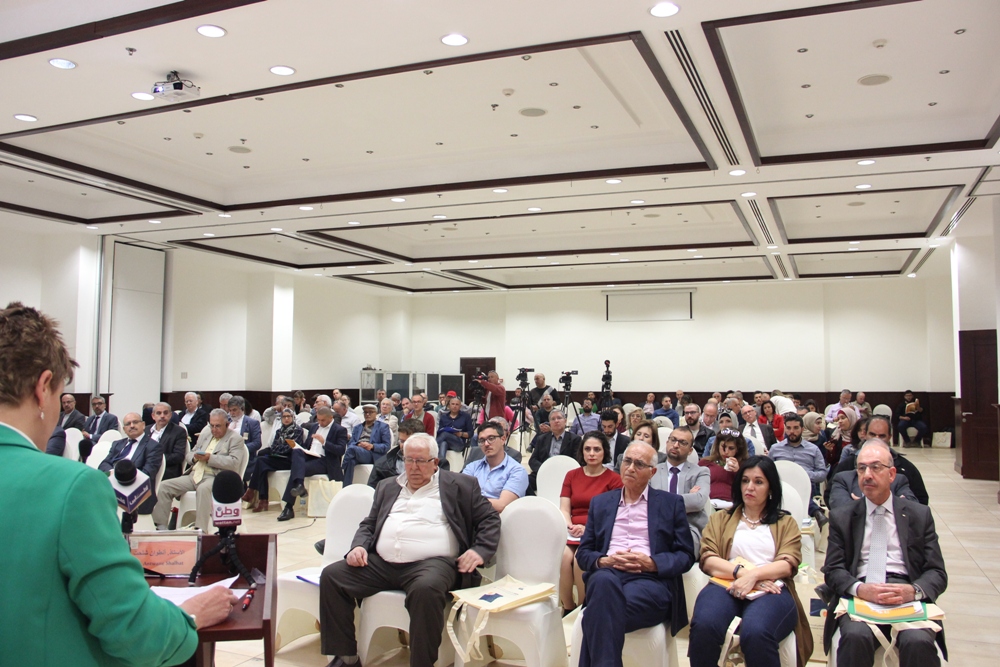 - The Trump Administration’s support is not only political, but ideological as well, and combines a transcendental religious vision with politics.
- Israel has shifted from complaining of an absent partner to dispensing with the need for one. Meantime, a new formula of the Palestinian state is being imposed on grounds of the current settlement enterprise.
- Identification with the US right wing offers Israel an opportunity in the short term, but it is associated serious risks, which can be used by the Palestinians.

Ramallah: The MADAR Strategic Report 2018 concludes that the election of Trump as President of the United States of America has marked a defining moment for Israel and Israel’s settler right wing. This stage is characterised by a fervent drive to eliminate the two-state solution and put in place a new political logic. To sum it up, this logic dictates that settlement facts on the ground are the solution and that settlements are the point of reference of any political process. Dismantlement of settlements will not be an item to be discussed on the negotiation table. Accordingly, under the Trump Administration, Israel has shifted from talking about the absence of a partner to an attitude that dispenses with the need for one.

Results of the MADAR Strategic Report 2018 were announced in a conference held in Ramallah on Tuesday, 27 March 2018. The report covers the changes within the Israeli scene throughout 2017. It stresses that the change seen in the USA has had an additional strategic implication. This is not only because of Trump’s unconditional support of Israel, but also due to the composition of the new administration, which Trump surrounds himself with. The US Administration supports and deals with Israel and the question of Palestine in line with ideological perceptions, which combine a transcendental religious vision with politics. This has been demonstrated by the US recognition of Jerusalem as the capital of Israel and resolution to relocate the US embassy to the city.

According to the report, empowerment of the right wing and change of Israel’s elites intersect with a stable security situation as well as with a low international price for the continued occupation and associated atrocities. In addition to economic stability, the shift is taking place in the context of a sharp polarisation across the Arab region and neighbouring countries’ preoccupation with their own internal affairs. All these drivers encourage efforts to resolve the conflict in line with the right wing’s ideological vision. This explains the escalating discourse of annexation and political endeavours to impose sovereignty. An unprecedented campaign is being launched to “whitewash”, support, and prepare for further creeping annexation. In addition, an attempt is being made to keep the debate over different formulas of a potential Palestinian state, other than the traditional (sovereign) image of the state.

A window of opportunity for Palestinians
According to the report, despite the challenges posed by international, regional and Israeli challenges, Palestinians still have the chance to stand in the face of Israel and the occupation in view of all the anomalies produced by Israel’s alignment with the Trumpian and global right wing. The fact that evangelical Zionism identifies with the Israeli New Right led by Netanyahu allows Israel, in the short term, the chance to impose its vision. However, the report argues that this identification furnishes several opportunities. Firstly, it allows an opportunity for liberation from the US hegemony of the political process. Secondly, it turns Israel into a “partisan player”, which is subservient to the Republican party. Contrary to customary practice, Israel no longer reflects a transient US consensus among parties, despite what this implies in the future if the US Administration changes. Thirdly, it opens the door to Palestinians (if they make the best use of the chance) to develop synergies between the question of Palestine and global democratic systems and to win more support for the Palestinian civil struggle movements, particularly for the Boycott, Divestment, Sanctions (BDS).

Partisan shifts
The report addresses reflections of the US change on the domestic and partisan environment. In an unprecedented move, the Likud Party Centre unanimously made a decision, obliging all party members to seek to “allow free construction and enforce Israel’s laws and sovereignty to all liberated settlement areas in Judea and Samaria.”

Change in the USA has also reflected on the “left wing”. Elected Chair of the Labour party Avi Gabbay has sought to compete with the Likud by shifting towards the right wing movement. To this avail, Gabbay declared that in every government he forms, he will not let the “Joint List” into the government coalition. He further described the Joint List as anti-Israel. Gabbay announced it was not necessary to evacuate settlements within the framework of a peace agreement between Israel and the Palestinians. Later, he asserted that if negotiations with Palestinians failed, he would implement a unilateral withdrawal. This plan does not require that settlements be evacuated.

The report anticipates that the risks Netanyahu’s government faces on the grounds of the increasing corruption cases may expedite legislative and practical steps to annex settlement blocs, demarcate Jerusalem boundaries, and pre-empt the two-state solution in accordance with internationally recognised resolutions.

A changed leadership will not change policies of the occupation

According to the report, the change of leadership in Israel, even if it takes place by forming new governments that are not led by the Likud party, does not mean that Israel will necessarily see a change in political positions towards the occupation and settlement enterprise. In this context, the Israeli society is shifting towards the right wing. Maintaining Jewishness of the state, keeping up settlements, showing an aggressive attitude towards Palestinians in Israel, and casting doubts on the Palestinian leadership’s intentions, the right wing’s discourse has also transformed from peace and constituted part of the dominant discourse.

The report hypothesises that Netanyahu’s demise may result in the emergence of new actors in the Israeli political-partisan scene. A new party, or even new parties, can be established. Candidates for the next partisan stage include former Israeli Minister of Defence Moshe Ya’alon and former Chief of Staff Gabi Ashkenazi. There is also talk about forming an alliance between leader of the Yesh Atid (There is a Future) party Yair Lapid and Minister of Finance Moshe Kahlon.

The report reaffirms that deep structural changes within Israel underlie this shift. Changes are linked to demographic changes and social transformations. Parts of the groups, which were viewed as peripheral (in terms of the power of influence) have been repositioned in decision-making circles. These include the Mizrahi Jews, residents of development towns, Haredi Jews, and settler groups. By contrast, the centre forces which comprise the secular, socialist-oriented Ashkenazi group is being gradually driven to the periphery. Competition for the leadership of the Labour party, the stronghold of traditional secular socialism, is a significant indicator in the course of these transformations. Two candidates of oriental Moroccan ancestry, namely Amir Peretz and Avi Gabbay, ran for the chairmanship of the party. The latter won.

The report provides a detailed account of the structural changes and transformation within the structures of the elite in Israel. These have given rise to several important consequences. First and foremost, ongoing Zionisation has targeted segments that were outside the scope of Zionism, including the Haredi Jews, who now represent the largest settler group (30 percent of the entire settler population). In addition, the Mizrahi Jews’ support of the right wing has transformed from being protest-driven (e.g. the 1977 vote) into being ideologically motivated.

The regional context
On the regional level, the report states that changes on the Syrian scene have posed a key challenge, which has preoccupied political and security circles in Israel. Notwithstanding the declining power of the Islamic State of Iraq and Syria (ISIS), Israel is of the view that that Iran’s presence in Syria is consolidating.
As articulated in the Israeli Army Strategy, which was released in late 2017, Israeli military assessments envisage that the Palestinian front is the most potentially volatile. However, this front is listed as a second threat for which the army is preparing. In the opinion of the General Staff, the Palestinian front is superseded by the threat posed by the Shiite axis, which is being created by Iran. Over the past two years, this axis has included Syria side by side with Hezbollah in Lebanon.

The increasing presence of Iran and its allies, including the Shiite forces in Syria, has also led to upgrading Israeli assessments of the shape of the next confrontation. Israel claims that the Syrian and Lebanese fronts have merged into a new single front, namely the “northern front”. This means that the next war will be the first to be waged against the unified northern front, rather than against a separate Lebanese or Syrian front.

Challenges ahead of Palestinians of Israel
Monitored events that have affected Palestinians in Israel show several factors and challenges that threaten the Palestinian social fabric. These include raging violence that has reached an unprecedented level. A sectarian tone has been on the rise, also posing a risk to the social fabric of Palestinians in Israel.
The report drawn the attention that, on the level of Israeli authorities, an incremental policy seems to be taking shape. This policy is grounded in the economic containment of the elites vis-à-vis an open-end political confrontation with political elites and parties. That policy also combines an escalation of police violence, incitement against Palestinian citizens, and an unwritten, unclearly defined and negative complicity with organised crime within the Palestinian community.

Besides highlighting the absence of the Green Line, the Al-Aqsa operation and issue of cultural boycott unfold an increasing overlap between the issues of Palestinians in Israel and those of Palestinians in general. This demonstrates a growing engagement of, and interplay between, the different dimensions of the question of Palestinian.

It is to note that the MADAR Strategic Report 2018 investigates the Israeli scene in seven key areas: Israel and the question of Palestinian; Israeli domestic politics; Israel’s foreign relations; security-military issues; economy; social affairs; and Palestinians in Israel. An Executive Summary provides an overview of major strategic changes, which have impacted Israel and its internal and regional standings.

Comment by Dr. Ali Jarbawi
In his comment on the report, Dr. Ali Jarbawi, Professor of Political Science at Birzeit University, said that the US Administration’s absolute identification with Israel’s right wing and full protection of Israel across international forums encourages the Israeli government to move forward with it schemes to liquidate the question of Palestine.

According to Dr. Jarbawi, US one-sidedness is grounded in a vision that seeks to undermine international legitimacy of the two-state solution for the Palestinian-Israeli conflict. In other words, this vision excludes establishment of the Palestinian state on the 1967 border of occupied Palestinian territory. It might be acceptable to the USA and Israel to proclaim a Palestinian state in the Gaza Strip or in parts of the West Bank.

In regard of the [political] settlement file, Dr. Jarbawi highlighted that much hopes need not be pinned on Russia and Europe. He explained that the expected outcomes of the current, preventive track which governs the Palestinian context are minimal.

Dr. Jarbawi was of the view that another direction, which many people do not prefer in relation to the question of Palestinian, involves the adoption of an offensive strategy. This direction relies on the scenario, which envisions the lack of a potential political settlement.

Dr. Jarbawi concluded that the tenets of this direction include setting the Palestinian house in order and putting an end to the internal Palestinian political divide. Palestinians need to seriously consider resorting to international organisations, such as the International Criminal Court. The future of the Palestinian Authority should also be determined.