Palestinians in Military Archives in Israel 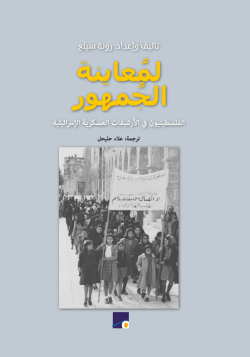 MADAR publishes the Arabic edition of Made Public: Palestinian Photographs in Military Archives in Israel by Rona Sela:
The narrative of “seized” Palestinian photographs in the Israeli military archives

Ramallah – The Palestinian Forum for Israeli Studies (MADAR) has recently published the Arabic edition of Made Public: Palestinian Photographs in Military Archives in Israel by Rona Sela. Translated into Arabic by Ala Huleihel, the book comprises 530 page. Made Public describes an arduous journey of research to track down the destiny of Palestinian photographs seized in Israeli archives. These were looted from Palestinian homes or pockets of Palestinian martyrs, or taken from within or from the skies of Palestinian villages for military purposes.

Made Public features a large number of rare high quality photographs of life in Palestine and the events that influenced Palestine’s history. It also presents a collection of aerial photographs, unfolding fully the landmarks of a number of destroyed Palestinian villages, including homes, streets and neighbourhoods. Aerial photographs allow restoring the architectural, geographical and topographical structures of these villages.

Made Public provides an account of the methods used by the Israeli pre-state and state military bodies to collect and preserve visual information and other material related to Palestinians throughout the 20th century. It shows how military archives seized control of, and subjected, this data to a colonial administration in every sense and in a manner that exactly identical to the practices of modern colonial powers, but in more sophisticated ways.

Sela describes how the bulk of information and knowledge about Palestinians in the military archives were linked to a variety of measures, including intelligence activities for military purposes. Concomitantly, official military bodies plundered materials from archives and groups affiliated with institutions, private homes, soldiers, martyrs and prisoners. Furthermore, these bodies secretly photocopied information on Palestinians and their towns for the purposes of domination and occupation.

According to Sela, these materials were collected in their entirety from Palestinian sources and creative figures or made by Jewish/Israeli forces. The materials are of relevance to Palestinians. They are managed and controlled by oppressive colonial agencies and structures, which involve censorship, obstruct access, prevent disclosure, delete, conceal information, and control the identity of persons authorised to access these materials. Colonial structures also take possession of, and subject, the materials to the laws of the occupying Power, criteria and regulations of Israeli archives, and malicious interpretation and classification.

Made Public was first published in Hebrew in 2009. It reintroduces representations of the public sphere, the majority of which were proposed earlier. These particularly feature photographs and materials related to, or revolving around, Palestine up until the 1950s. For the first time, a discussion was raised about colonial control systems and agencies. In addition, other research conducted later by Sela reveals that further materials – visual and textual – were taken as booty or looted over the course of the 20th century, particularly in Beirut. Against this backdrop, Sela designates a substantial section of Made Public to address these archives. This section seeks to disclose the materials which Sela has brought to light through judicial pursuits and effective research process.

In his preface to the publication, Antoine Shulhut notes: “This book has the many advantages, primarily in terms of the reliable information taken from first-hand sources, which were readily accessible to the author. Of no less importance and insight is the book’s intellectual findings. These are so sharp and clear that relieve us of further scrutiny. First and foremost is the finding that the Zionist colonisation of Palestine, in 1948, 1967 and beyond, has not only taken place in the geographical sphere, but also within the spheres of consciousness and memory. Like the Israeli archive, colonial archives are viewed as sites for producing the historical narrative through structures of erasure and concealment.

Sela discloses aerial photographs, which were taken by Israeli agencies of Palestinian towns before the 1948 Nakba. She provides a comprehensive account of the pre-Nakba Palestinian presence. She also gives a plethora of information on the vibrant life in Palestine and broad geographical dispersion before the Nakba. At the same time, Sela serves as an eyewitness to the massive destruction inflicted on the Palestinian entity. According to Sela, these photographs provide the last broadest documentation of Palestinian geographical dispersion. The photographs help to recognise and understand the map of Palestine from the perspective of a pilot before the Nakba. Despite the fact that these photographs were taken for the purposes of colonial occupation and for delineating destinations and movement during the process of occupation, these purposes can now be reversed and used to structure knowledge about the pre-1948 life of Palestinians. By these, knowledge can retrieved about each village and town, including their architectural, geographical and topographical structures, population density, characteristics of agricultural activity, roads, etc. According to their locations on the map, hundreds of aerial photographs can be juxtaposed one after the other. An accurate, synthesised photograph can then be structured, including an estimation of the pre-1948 Palestinian presence. In other words, an aerial map can be produced, enabling the description of the Palestinian presence and concentration – as needed – in particular areas across the country, or of the country as a whole. Importantly, this map can represent the history of the persecution of Palestinians.”

More in this category: « 1929: A Journey to the Year Zero
Madarcenter.org Website, All Rights Reserved © 2020