Ideology and Propaganda in Education 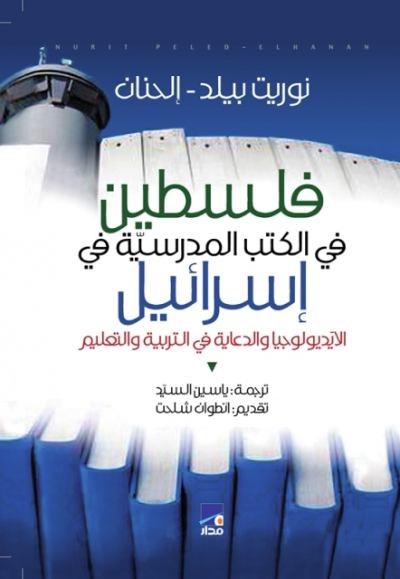 This book presents a critical study of one aspect of the ‘Grand Zionist Narrative’ which serves, explicitly as well as implicitly, as a collective conscience to the whole Israeli society.
In the preface, the author explains that school books in Israel are written for youngsters who will be drafted into joining compulsory military service at 18 years of age and carry out the Israeli policy of occupation in the Palestinian territories. The concern of the study is not to describe Israeli education as a whole but rather to focus on one specific question: how are Palestine and the Palestinians against whom these young Israelis will potentially be required to use force, portrayed in school books?

Peled-Elhanan indicates that her special interest in school books stems from the conviction she shares with other researchers, both in Israel and in other countries, that in spite of all other sources of information, school books remain powerful means by which the state shapes forms of perception, of categorisation, of interpretation and of memory, that serve to determine personal and national identities. This is true especially in nations such as Israel where ‘history, memory, [personal identity] and nation enjoy an intimate communion’.
This book presents a critical study of one aspect of the ‘Grand Zionist Narrative’ which serves, explicitly as well as implicitly, as a collective conscience to the whole Israeli society. This narrative is reproduced in school books of three disciplines: history, geography and civic studies. It consists of an analysis of the visual and verbal texts that represent the ‘others’ of Zionist Jews, namely Palestinians  both the citizens of Israel and the non-citizens who have been living under a military regime in the occupied Palestinian territories since 1967.

In her study, Peled-Elhanan comes up with many interesting conclusions. Of these, Israeli school books inculcate ‘wanting-not-to-know’ about the other to Israeli youth. At the same time, the state of Israel has never encouraged ‘peace education’ or official mixing between Jewish and Palestinian students. On the contrary, the ‘plethora of opportunities notwithstanding, the topic of peace and co-existence never became part of the formal academic curriculum and never carried any academic credit in its own right.’ Besides serving as a tool for instilling discriminatory ideas and racist attitudes, the representation of Palestinians in Israeli school books enhances ignorance, both of the real social and geopolitical situations and of geographical and historical discourse. Assuming that school students do not run to libraries to verify the facts and fill in the gaps in their school books and that most teachers were brought up on similar books, one must conclude that the past three generations of Israelis are, for the most part, not aware of the geopolitical or social realities of their country. With such distorted pictures and skewed maps firmly fixed in their minds, Israeli Jewish students are drafted into the army, to carry out Israeli policy vis-à-vis the Palestinians, whose life-world is unknown to them and whose very existence they have been taught to resent and fear. This indoctrination or rather ‘mind-infection’ in Dawkins’ terms, is achieved through the authority of scientific discourse, both verbal and visual, which is considered neutral, objective, unbiased and therefore representative of truth.

According to Peled-Elhanan, the negative representation of others coaches students to hostility and contempt towards their immediate neighbours and environment and towards international accords and laws. This is quite contradictory to the persistent Israeli claim, echoed by American and European politicians who endorse Israeli propaganda, that ‘Palestinians teach their children to hate us and we teach Love thy neighbour.’

In his foreword to the Arabic translation of the book, Antoine Shulhut of the Palestinian Forum for Israeli Studies (MADAR), explains that the study is pioneering in that it focuses on the visual discourse and the rhetoric devices. The analysis of the texts is multimodal, and the mode of inquiry is grounded in the social semiotic theory which states that representation is never neutral but always ‘engaged’, namely ideological.

According to Shulhut, the study concludes, among other things, that the Israeli school books continue to reiterate what the author describes as the ‘usable past’. This past has not been changed, even slightly, so that it can be consistent, in the least, with launching a “political process” between Israel and the Palestinians with the aim of reaching a “peace agreement”. In a similar vein, another Israeli author states: “It seems that peace has remained outside the perimeters of schools. Those who view it do so as if it were something that belongs to politics which gives rise and different opinions, or as a minor deviation from the course of the warmongering (Israeli) history. Apparently, it is as if something is telling everyone: “What is the use of changing books if peace, according to the perspective mentioned above, is a short chapter that will not hold for long?” On the other hand, Peled-Elhanan adds that the school books under investigation harness the past to the benefit of the present of the Israeli policy of expansion. These books may also provide an indicator of the policy Israel intends to implement in the future.

More in this category: « Picnic Grounds Displaced At Home »