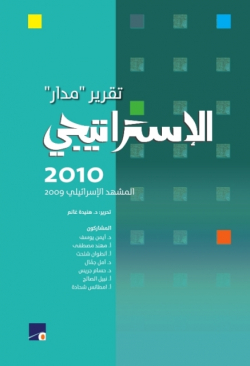 2009 witnessed a number of key events that shaped the political and diplomatic reality in Israel of which the most significant were the war on Gaza and the internal, regional and international repercussions, in addition to the forming of a new Israeli government headed by Benyamin Netanyahu and which combines neo-liberalism and neo-Zionism.

War on Gaza and its implications:
At the security level - Reinforcing quietness on the southern front: From a tactical point of view and by the end of the war on Gaza, Israel succeeded in imposing a state of relative quietness in the south of Israel, as well as in regaining part of its citizens’ confidence in the capacity of the army to manage the war, especially after the deterioration of the status of the Israeli army that resulted during the war on Lebanon. But Israel’s success remains a limited tactical success, since it was unable to achieve a strategic victory by dismantling the capacity of the Palestinian Resistance to launch missiles. This means a fragile quietness that carries the danger of explosion in the future.

At the military level - The adoption of the suburb ideology as a military strategy. This practically means the transformation of power discrepancy in confronting unconventional powers including the ability to target civilians and to destroy infrastructure in an intentional and pre-meditated manner into the most important means to pressure these organizations. This is what we have examined in detail in last year’s strategic report. This year, we are dealing with this issue starting from new perspectives as will be shown in the chapter on the military issues.

In Contrast to these changes that were to a large extent, expected and calculated from an Israeli stand point, international and legal implications resulting from the war, had they been employed properly, could have been transformed into a strategic loss.

Rise of popular confrontation against Israel. The promulgation of the Goldstone Report underpinned an important turning point, not because of the possibilities of translating the Report into practice so as to allow for an international legal prosecution of Israeli leadership - currently uncertain- but because of the significance of its contribution in urging and enhancing certain international approaches to put pressure on the Israeli State. This can be done on two levels:-
• First: Opening a window towards enhancing legal prosecution campaigns rose against Israeli military and political leaders. In spite of the fact that such campaigns might not necessarily result in actual prosecution of Israeli leaders, the intensification of such campaigns, especially in western countries traditionally regarded as allies to Israel, such as Britain and Spain, will likely induce antagonized popular public opinion against the Israeli occupation.

• Second: Increase of fear of the consequences of using excessive power in future wars: In spite of the fact that we do not believe that Israel is in a position to give up the Deterrence theory that is based on the Suburb ideology, fears of future legal prosecution, not to mention, the rising worries of delegitimizing Israel, might form a particular restraint in the face of excessive use of power against civilians in the future.

Return of Neo-Liberalism and Neo-Zionism: The return of Benyamin Netanyahu to the governing authority is like a return of the neo-liberal economic thoughts and neo- Zionism that is based on the reinvigoration and revelation of Herzl’s and Ben-Gurion’s Zionism. This return carries significant projections that are expected to influence the Israeli Scene from one part and the Palestinian Scene from another. The most significant of these projections are:

Transformation of the government political program into a program to maintain the Jewish nature of the State: Benyamin Netanyahu specifically reiterates the extent of the link of his Zionist ideology with that of Herzl from one part and with Ben Gurion from another. He insists that the core of the Fathers’ Zionism is to maintain the Jewish nature of the State. This means the escalation of demands to recognize the Jewish nature of the State and transforming this demand into a part of the international diplomacy agenda, in addition to the Judization of whatever can be Juadized, which practically means intensifying colonization in occupied Jerusalem against tightening restrictions over its Arab population and dealing with them in the same way the state deals with the rest of the Palestinians in Israel; from the perspective of them being a demographic threat that should be controlled.

Politically, excluding any real political concession toward the Palestinians: Talking in the name of national Zionist values and the importance of upholding Jewish values and Jewish history simultaneously with the need to encourage immigration to Israel and work on plans to bring in more immigrants, prepares for constitutes the ground for the development of rival opposites, originally in ideological conflict within one basket. These rivals include from one part, the one carried by Netanyahu and represented by the Russian national secular immigrants and led by Avigdor Lieberman, and from the other, the Eastern religious extremist wing represented by Elie Yashai. Nevertheless, this alliance shares the same position of being right wing dominated with the same rejection of proposed political solutions.

Squeezing the Palestinians in Israel: The return of Neo-liberalism and neo- Zionism carries strategic implications with regards to the future of Palestinians in Israel and implies growing restrictions of the space of their political work. In addition, this return also implies more suppression of their national identity against the enhancement of the Jewish character of the State. This is being carried out by the legislation of adequate laws from one part and by the endorsement of projects that include a Jewish demographic and political supremacy not to mention the continuous encouragement of immigration to Israel.

At the Diplomatic level, growing of tension with the United States: To confirm our expectations of the last year, the rise of a right wing government in Israel, under the ascent of Obama’s pragmatic administration, threatens to bring tension into relations between both countries, but at the same time, will not necessarily jeopardize the existing strategic alliance between them. Yet, we see that this tension is still likely to have more escalation under the same Netanyahu Coalition government. For, while the crisis that occurred after Israel’s announcement to build 1600 settlement units in East Jerusalem during the visit of Joe Biden to Israel has hit the highest point in the tension between the two governments, it reveals two issues that are supposed to continue in influencing the dynamics of internal and external political circumstances under the Netanyahu government as follows:

• Increase of linkage of external politics in Israel with the rational of its internal relations. This means that Israel has the potential to commit practices that are seemingly unexpected and inexplicable from an external point of view due to rigid internal policies, party calculations and tactical coalition maneuvers.
Deepening gap between the coalition program of Netanyahu government and its factional ideological formation and soft diplomatic issues presented by Netanyahu, especially the ones influencing the American orientation in the region. For, he speaks of his intention to achieve a just and real peace, and his acceptance of a certain formula for the two-state solution which he stated in his speech at Bar Ilan University. If Netanyahu initially succeeded in his maneuver to have a temporary freeze of settlement in the West Bank with the exception of Jerusalem, the quality of his coalition and its requirements transformed his maneuver during Joe Biden’s visit to Israel during the last weeks into a bouncing ball, to the extent that it will be transformed into an exit for the American Administration in order to force Israel to freeze settlement activities in East Jerusalem, henceforth, facilitate return to negotiations. This will actually put the nail in the coffin of the right wing government with its current formula; this could be avoided if Netanyahu succeeds in bringing new partners into his government.