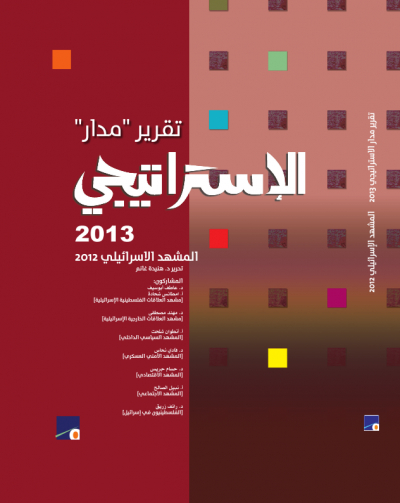 The 2012 Strategic Report of the Palestinian Forum for Israeli Studies (MADAR) monitors major developments on the Israeli scene throughout 2012 and explores future developments and the course of events over the upcoming period. The Report addresses and analyses in detail developments witnessed on the Israeli scene in seven significant areas: Israeli-Palestinian relations; internal Israeli politics; foreign relations; security-military issues; economy; social affairs; and Palestinians in Israel. An Executive Summary provides an overview of major strategic changes, which have impacted Israel and its internal and regional standing.

As has been the case over previous years, a group of specialist researchers have supervised the compilation and editing of the MADAR 2013 Strategic Report. In their analysis, the researchers have adopted an objective, scoping perspective of events that characterised 2012, avoiding a reportorial narrative of events in favor of a focus on strategic changes.

2012 Israel – The General Scene
According to the Israeli Central Bureau of Statistics (ICBS), Israel’s population was estimated at around 8 million (7,980.9) towards the end of 2012. These included 6,015,000 Jews, accounting for 75.4% of the general population census. The Arab population comprised 1,648,000, or 20.6%, of the total population. The general population census also included approximately 300,000 Palestinian residents of East Jerusalem and 319,000 residents classified as others. These statistics do not include approximately 200,000 foreign workers.

In line with official Israeli data, Jerusalem, including the eastern portion of the city, is the largest city of Israel, with a population of 804,355. Among them 497.000 Jews live in the city. These include approximately 225,000 settlers, who live in East Jerusalem.
Accommodating almost half the number of Jerusalem’s population, 404,750 residents live in Tel Aviv. Haifa comes in the third place, with a total population of 270,348. The city of Bene Beraq houses the largest community of ultraorthodox Haredi Jews (163,301). The second largest Haredi community lives in the Beit Shemesh city (84,209). For the first time, the settlement of Modi’in Ilit in the vicinity of Ramallah houses the third largest Haredi community (totalling 52,060) in Israel.

In 2012, the growth rate of the Jewish population was 1.8% and of the Arab population 2.6%. In contrast with 1.4% among secular Jews, the population growth rate among the Haredim alone comprised more than 3%. Natural population growth was a main result of around 170,000 births. The immigrant population comprised only 16,500 Jews of the general population. Modi’in Ilit settlement registered the highest natural birth rate, with an average of 5.64. The fertility rate (number of births) among the Arab population has seen a steady drop. Compared to 9.2 in 1948, 7.25 in 1979 and 4.75 in 2000, the Arab fertility rate plummeted to 3.51 towards the end of 2012. In contrast, the fertility rate among the Jewish population has not dramatically changed. Marking 3.8 in 1948, it only dropped to 3.0 in 2012. First and foremost, the birth rate among the Haredi community is not affected by surrounding social variables. Accounting for a continued population increase, Haredi Jews associate birth with Jewish religious beliefs, which prohibit birth control. As one of the internationally high rates, Jews’ life expectancy at birth is 80.7 years for men and 83.9 years for women. By contrast, the Arab life expectancy at birth marked 76 years for men and 80 years for women.

Paradigmatic Events and Anticipated Scenarios
In 2012, Israel was influenced by a number of significant internal, regional, international events and changes. On the regional level, 2012 saw a continued unstable, vague and obscure geopolitical situation, particularly in Egypt and Syria. Israel has continued to be engrossed with the Iranian “nuclear threat”. On the international arena, re-election of Barack Obama for a second presidential term in the USA has provided an important indicator, which will definitely affect the future path of the political process and Palestinian-Israeli conflict.
Domestically, the Israeli elections and the formation of the new government headed by Benyamen Netanyahu and includes a coalition betwen Yesh Atid (There is a Future) Hbayet Hayehudi (The Jewish Home), and Hatnua (The Movement) additionally to Likud- Beiteinu, were a significant event that will shape and rearrange the Israeli political scene. New political forces have emerged and others dwindled. Although the Israeli electoral battle centred on internal issues and avoided the Palestinian-Israeli conflict, Palestine’s recent admission to the United Nations as a non-member observer state as well as dynamics of the Operation Pillar of Cloud have marked two strategically significant events, entailing long-term implications on the type of future confrontation and Israel’s international standing.

The Regional Circle: An Environment Saturated with Threats
Israeli analysis indicates that 2012 saw a transformation towards a strategic environment, which harbors a plethora of threats to Israel’s national security. Also, 2013 may see more imminent threats, especially from Syria. In light of ongoing vibration and mobility in the surrounding geographical scene, security research centers advise that Israel build its own strategies on the assumption of a continued state of “future uncertainty and obscurity”. Israel should take account of the increasing risks posed by the increasingly consolidated Islamic currents. These need be seen as the more profiting and gaining from deposed regimes, which have historically allied with Israel.

Amos Yadlin lists five primary challenges that faced Israel’s national security in 2012: (1) continued transformation of Iran into an nuclear state; (2) maintaining peace of Egypt and Jordan in light of regional changes; (3) Syrian civil war and fear of erupting violence on the northern front; (4) twofold relation with Palestinians, including the political dimension of a renewed negotiations process and security-military dimension emanating from Gaza; and (5) keeping Israel’s status on the international scene. Yadlin concludes that in the general balance of Israel’s national security, pros have outweighed cons. In 2012, Israel’s geopolitical status did not see serious dramatic events or a real change. Practically, Israel has managed to maintain peace with Egypt and Jordan. In relation to the continued occupation of the West Bank, Israel has not paid a real price that would strategically affect it. The settlement enterprise went on unabated. Compared to 2011, we can claim that the settlement projects quadrupled, effectively making 2012 Israel’s “settlement spring”. In the aftermath of Operation Pillar of Cloud, Israel attained an armistice with Hamas, holding the latter responsible for keeping quietude on the southern front.
The northern front with Syria did not see any dramatic incidents. Throughout 2012, the Syrian border remained generally calm. At the same time, continued engagement in the internal war has exhausted technical and human resources of the Syrian army. It has dismantled the “Syrian threat” and minimized probabilities of an abrupt Syrian action to restore the Golan Heights. Accordingly, Israel has managed over the past two decades to crack down “two threats”, which it saw as a menace of its national security. These are Iraq of Saddam Hussein and Syria, which has submerged in its own internal crisis.
More importantly, according to Israeli sources, the Syrian situation has dealt a severe blow to the Iran’s position, furnishing a chance to undermine the Iranian axis and disrupting communications between Iran and Hezbollah once the Syrian regime falls.

However, in spite of opportunities seen by Israel as advantageous and favourable to the Israeli national security, the 2012 developments imply increasing threats to the status and future path of Israel. These include:
The northern front threatens to transform into a hot front due to three factors:

1. Syria shift into a battlefield that attracts anti-Israel Jihadist and expiatory movements. In the future, these would probably launch operations against Israel from the Golan Heights.

2. Iran organises loyal militias in Syria (as has already been leaked out). These might be activated once the Syrian regime collapses, constituting an executive arm of the Iranian will. In other words, a twin of the Lebanon-based Hezbollah might be produced.

3. Weapons that disrupt the strategic balance between Israel and Hezbollah might be relocated. Israel is afraid that the Syrian regime, once it is dismantled, would seek to abandon the arsenal it possesses to Hezbollah, generating a structural “disruption” of the military balance map and a threat to Israel’s superiority. Launched in May 2012, the Israeli military strike on Syria provided a warning that Israel will not accept such a transformation. As it already did in Lebanon Israel will not hesitate to delve into the “Syrian swamp”.

In connection with Egypt, although 2012 did not register a dramatic change in the relations between both countries, Israel is still so worried that the situation in Egypt might lead to revocation of the Camp David Treaty. For Israel, Camp David is an irreplaceable "strategic treasure". Under certain circumstances, Israel fears that Egypt would shift to a hostile state. In this vein, Israeli security sources highlight security threats originating from the Sinai Peninsula as well as risks of a developing alliance between Jihadist groups in Sinai, Gaza and Syria.