Israel and the Settlements

The Fixed and The Changeable Positions of Governments, Political Parties and General Public 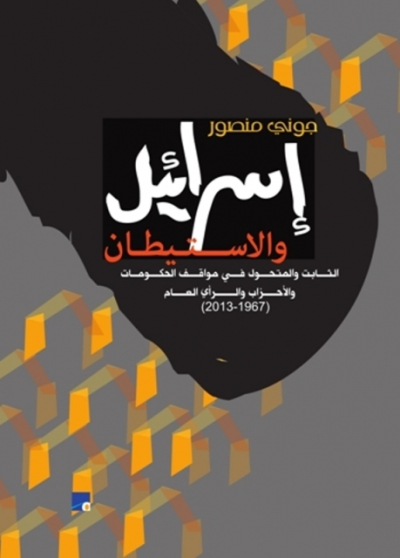 This study reviews the positions of the Israeli political parties and movements with regards to the Israeli settlement project, especially after Oslo, through analyzing the positions and policies since the Israeli occupation of the Palestinian territories in 1967, the main lines of debate, terminology and milestones.

The study highlights the ideological, pragmatic, political and demographic factors that have affected the expansion of the Israeli settlement in the Palestinian territories occupied in 1967, drew the settlement’s path, set the nature of its expansion and defined its different stages.

The study is based on a diversified group of resources and references, such as books, researches, articles, archive material, minutes of Knesset and cabinet sessions, newspapers, magazines, as well as local, Arab, regional and international conferences and agreements and conventions related to the Palestinian question.

The study arrived at an assortment of conclusions, most importantly is that the governments of Israel adopt a maneuvering approach when it comes to settlements. At the same time as prime ministers of Israel voice their support to the two state solution, they keep on supporting and anchoring the settlement project, which stands in the path of the Palestinian state, with Jerusalem as its capital.

The study shows that the settlement project that is being implemented now in areas of the West Bank is an episode of a very long series that was initiated in the late nineteenth century. It aims at sharing the West Bank with the Palestinians, so that the area of Israel would be more than 85% of historical Palestine, leaving the Palestinians to manage their daily issues within the frame of a limited autonomy.

The study follows how different Israeli governments, over the course of decades, worked on connecting the West Bank’s infrastructure with Israel, such as the national electrical grid and water infrastructure. Which allows Israel to use the current connection as a bargaining chip against the Palestinians. This has meant that Israel, through its settlement project, imposed the connection of the vital services of the Palestinians with respect to settlements, through which Israel can control those services and the Palestinian population, in the case of Palestinian dissent, opposition or uprising against Israel, thus putting them under pressure and obstructing their daily lives.

The study adds that the political parties and movements in Israel have a general agreement when it comes to settlements and that their disagreements are superficial, especially when looking at the Likud and Labour parties. Furthermore, the Oslo accords and the agreements that followed didn’t put the settlement project and its expansion on hold. On the contrary, the timeframe since the signature of those accords contributed to further land confiscation, the building of the apartheid wall and preventing Palestinians from accessing their lands. It also helped Israel in marginalizing the significance of settlements in the negotiations with the Palestinians. But it is clear that the settlements are a major obstacle that prevents reaching an agreement between the two parties or a final solution to the Palestinian-Israeli conflict.