Israel and the Apartheid 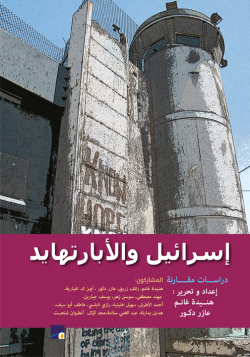 Ramallah – The Palestinian Forum for Israeli Studies (MADAR) has recently published Israel and Apartheid: Comparative Studies. Authored by several scholars, the book offers a collection of studies and articles, which attempt to explore analogies, differences and intersections between control systems within the apartheid and Israeli regimes. As an approach, the contributions take into account the distinct contexts of persecution, control and political projections.

The book contains five chapters, each including a number of articles that shed light on different of aspects of the theme of the book.

Titled “Between Apartheid, Settler Colonialism and Military Occupations: Problematic Approach and Comparison, Chapter 1 includes two articles on the analogies and differences between the apartheid and Israeli regimes, problematic approach and comparison, and political economy. In her article, “The Complex Framing of a Hybrid Regime: The Dialectic of Settler Colonialism, Occupation and Apartheid in Palestine”, Honaida Ghanim explores the problematic comparison between the South African apartheid regime and Israel’s governance system. According to Ghanim, the situation in Palestine is complex and involves multi-layered tools of governance, administration and control. These are functionally used to eternalise the structure of the Jewish nation state.

Raef Zureiq and Adel Dakwar examine a set of differences and analogies between apartheid in South Africa and the current context in Palestine/Israel. The article is informed by a perspective that presents apartheid as a dynamism and process, far more than a static structural case.

Chapter 2, “The Production of Hegemony and Manifestation of Apartheid in Practice: Legal Education and Religion”, features three articles. In “Education under South Africa’s Apartheid Regime: Insights in the Case of Israel”, Ayman Ighbariyyeh focuses on apartheid and recent curriculum developments, which pay unprecedented attention to ethno-religious nationalism of the Jewish identity. Ighbarriyeh examines religious components, which make up and give shape to the Jewish identity.
Chapter 3 is titled “Spatial Planning, Marginalisation Policies and the Production of Enclaves”. This process integrates space planning tools, supported by segregation and cantonisation policies. Mechanisms are used to confine Palestinians in enclaves similar to South Africa’ Bantustans. The first article of Yousef Jabarin, “The Fantasy of the State: Hegemony Planning, Marginalisation and Persecution between Israel and Apartheid”, investigates the role the state’s spatial planning plays in marginalising and persecuting Palestinians.

In their article “Apartheid without Restrictions: Space Planning Practices in Israeli-Controlled Areas of the West Bank”, Ahmed al-Atrash and Suheil Khaliliyyeh review manifestations of the so-called “post-apartheid” regime in the Palestinian context, including in Area C and East Jerusalem. The authors argue that, instead of ending the occupation, the Israeli authorities have used the Oslo Accords to sustain silent apartheid in the West Bank.

Razi Nabulsi’s “This Road Leads to Area A of the Palestinian Authority – Beware of Entrance: Policies for Producing Enclave in the West Bank”, provides a review of the colonial policies used to produce Palestinian communities as enclaves/Bantustans. In these, Palestinians are gathered and crammed into their own space. Israelis are denied access to these enclaves, however. Nabulsi argues that enclaves are produced through multiple systems of Israel’ control. In this context, legal tools intersect with the social and political conditions created by colonial relations, forcing Palestinians to move to enclaves.

In “Segregation and Control Policies: The Gaza Blockade and the Apartheid Regime”, Atef Abu Seif investigates and analyses Israeli blockade imposed on Gaza since 2007. Abu Seif tracks down Israel’s use of disengagement from, and blockade on, Gaza as tools to produce and consolidate apartheid against the Palestinian population.

In his “Palestine, South Africa: The Common Struggle against Apartheid”, Abdul Ghani Salameh compares the cases of Palestine and South Africa on two levels: (1) A comparison between the roots and nature of the each case, history of the colonial regime in both countries, and functional roles of both emerging regime; and (2) a comparison between the tools, techniques and objectives of struggle in both cases.

Finally, Chapter 5, “Apartheid in the Palestinian and Israeli Discourses”, comprises two articles. In “Self-Analysis of the Rising Apartheid Discourse in Palestine”, Majd Kayyal provides an overview of the psychological, political and social drivers of the growing use of analogy between the Zionist regime in Palestine and apartheid in South Africa. Antoine Shulhut’s “Apartheid in the Israeli Political Discourse: When, How and Where?” analyses the debate within Israel over the apartheid-based Israeli political system on both sides of the Green Line.

More in this category: « Israeli Planning in Jerusalem Israel and the Apartheid »