In the Meaning of the Jewish State

The “Jewish State” Issue and its Multiple, Covert and Introvert, Connotations and Sides 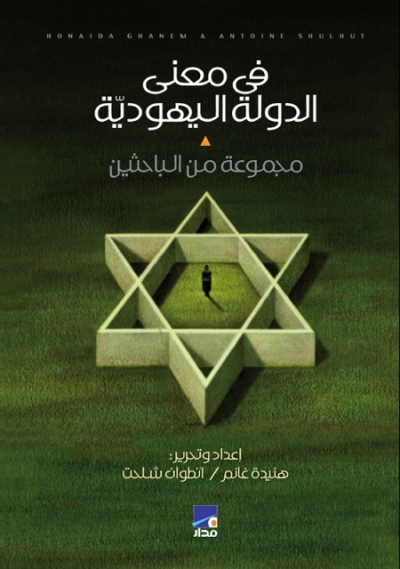 This book includes papers presented at a symposium organized by the Palestinian Forum for Israeli Studies (MADAR) with the support of the PLO Negotiations Affairs Unit, on the issue of “The Jewish State” and its multiple, covert and introvert connotations and sides, in light of the repeated Israeli demand from the Palestinians and Arabs to recognize Israel as a Jewish state as a precondition to negotiations.

The book also includes papers that highlight the same topic from different angles, which seek to revoke most hypotheses that Israeli political and academic elite are referring to, in order to justify the demand that has significantly increased in the past few years.

All presentations agreed that the stress of those elites that Palestinians in exile recognize Israel as a Jewish state aims at raising the ceiling of Israeli demands to new levels that are next to impossible, among other goals. It also aims to terminate an internal political debate and conflict, especially with Palestinians of 1948, and to put an end to the future of the conflict to enforce the Zionist narrative, in particular with regards to the past guilt of elimination and displacement.

In her presentation, Honaida Ghanim gives a general background to the topic, highlighting he connotations of the recognition of the Jewish State, whether from the aspect of Israeli aims or its implications on the Palestinian level and on the conflict. This viewpoint is based on ignoring the conflict’s colonial dimension and attempts to transform it into a religious conflict and to recognize the Jewish Zionist narrative, and imposing an idealistic model that is unrealistic and baseless.

The article by Dr. Hasan Jabarin studies the constitutional meaning of the “democratic Jewish State” through answering the following questions: what is the constitutional understanding by Israel to the statement “We the nation”? and what are the defined regional borders –the region- of the Israeli constitutional system? And how could the borders interpret the question of equality among Palestinians living within the Green Line and the Israeli Jews?

Ra’ef Zreiq’s article addresses the two faces of the Israeli demand to be recognized as a “Jewish State” or a “State of Jews”, emphasizing that it cannot be divided theoretically, but it is important to draw the bond between them: First side being the tactical political side and the second being the intellectual ideological side.

The article by Bashir Bashir focuses, selectively, on the some of the emerging central transformations in the Israeli society and its role in forming what he calls “new approach for the Israeli Arab conflict” and its impact on the issue of the Jewish State. It also processes what should be done by the Palestinians in light of the insisting on the Jewish state issue and tries to negotiate a distance with this demand, analyzing primary symptoms to deal with it within a political ethical framework, which paves the way for a historic settlement between Jews and Arabs in historic Palestine.

Nimer Sultani’s article presents a critique to a prominent defensive Israeli model about the “Jewish and Democratic” state with the aim to normalize Israel, which is the book “Israel and the Family of Nations: The Jewish Nation-State and Human Rights”, by Alexander Yacobson and Amnon Rubinstein, in parallel to the strong interjection of the term “State for all its citizens” into the pubic Israeli debate, especially by the leaders and intellectuals of the Palestinian minority.

The article by Ahmad Rafiq Awad attempts to answer the question: could Israel be both a Jewish and a democratic state in the same time? He referred to the opinions that saw this possible, and others that show the impossibility of such a case, whereby Israel is both Jewish and democratic.

Antoine Shalhat presents in his article a thorough analysis of the inter-related occurrences that came along the Jewish state demand, and the Israeli motives behind insisting on it and its expected outcomes. The analysis comes in line with what was reflected in multiple Israeli readings, since it started being repeated unprecedentedly some years ago, until it became a case of collective doctrine in Israel.

In the book introduction, authors said “Behind the compilation of this book in the meantime is a general note that states that regardless of the political gains Israel is attempting to harvest through demanding that its is recognized as a Jewish State, it is important to discuss the meaning of the Jewish state and its practical manifestations in order to understand its implementation on the ground, especially in relation to, not only Palestinians who hold Israeli citizenship, but also to the historic dimension of the Palestinian question”.
This publication is supported by the PLO Negotiations Affairs Department.

More in this category: « Emptied Lands Ethnocracy: Land and Identity Politics in Israel/Palestine »