A Legal Geography of Bedouin Rights in the Negev 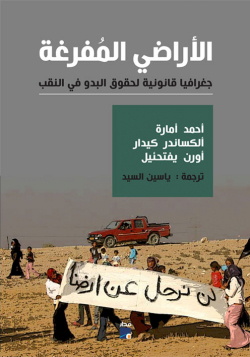 Ramallah: The Palestinian Forum for Israeli Studies (MADAR) has recently published the Arabic translation of Emptied Lands: A Legal Geography of Bedouin Rights in the Negev by Alexandre Kedar, Ahmad Amara, and Oren Yiftachel. The book presents political and legal arguments on the Israeli doctrine, which seeks to Judaise the Negev, deny historical ties and rights of the indigenous population in the region, and uproot and deprive Palestinians of the space of their natural growth.

Kedar, Amara and Yiftachel carry out a novel and thorough analysis of the historical geography of the Negev for the last 200 years based on newly revealed Ottoman, British, and Israeli archival material, and construct a geography based on Bedouin documents, memoirs, and oral history. Simultaneously, they offer a fresh analysis of the late Ottoman and British Mandate land regimes.

The authors conduct a thorough legal analysis of Ottoman, British, and Israeli legislation, adjudication, and law enforcement pertaining to the Negev, focusing on Bedouin land, settlement, and cultural autonomy. This original analysis spans three ruling regimes and is based on new surveys of legal and archival sources in Jerusalem, Istanbul, Ankara, London, Amman, and Washington, DC, as well as private Bedouin archives.

A detailed survey and analysis of new developments in international law pertaining to Bedouin rights as an indigenous group is provided. The authors thereby add new insights into the growing literature on indigenous peoples in general.

Kedar, Amara and Yiftachel closely examine the Israeli construction of the Dead Negev Doctrine (DND) and its attempt to reinterpret Ottoman and British legislation. Based on legal-historical research, the authors demonstrate that the state’s claims of legal continuity from the Ottoman and Mandatory regimes that preceded Israel are unsupported. Likewise, we demonstrate that Israel’s assertion that the Bedouins lacked land rights cannot be sustained.

The authors empirically and then critically examine the historical-geographic components of the DND. They demonstrate that, contrary to prevalent official descriptions, beginning in the Ottoman period, the Bedouins gradually transformed from seminomadic agropastoralists into settled agriculturalists who enjoyed extensive legal autonomy. During this period, the indigenous community ruled itself in most aspects of life, most notably by coding and institutionalising a land and settlement system, which was accepted by both Ottoman and British rulers as well as by the new Zionist settlers and establishment. The authors also show that the large tracts of land in the northern Negev were not mawat. They had been owned, possessed, inhabited, and cultivated by Bedouin Arabs for generations –Bedouin Arabs who accumulated significant property rights under both Ottoman and British rule.

Kedar, Amara and Yiftachel explore the changing legal geography of indigeneity and its effects on Negev Bedouins. After arguing that the Bedouins are an indigenous people, the authors review international and comparative law pertaining to land conflicts between indigenous groups and settler and nation-states. They show that in recent decades the organisation and mobilisation of indigenous peoples around the world have resulted in a marked change, whereby states and international bodies increasingly recognise indigenous rights. The analysis shows that the 2007 UN Declaration on the Rights of Indigenous Peoples has increasingly (though not fully) assumed the status of binding customary international law. The changing international legal environment places added pressure on Israel to reform its DND in particular and policies toward the Bedouins in general.

The authors conclude that it is possible and necessary to replace the DND with a decolonising approach based on principles of recognition, equality, and transitional justice.

Translated by Yaseen Al-Sayyed, the Arabic version of Emptied Lands: A Legal Geography of Bedouin Rights in the Negev comprises 586 pages.

More in this category: « Unwriting Israel In the Meaning of the Jewish State »