A Comprehensive Reading in Netanyahu’s Political and Security Doctrine 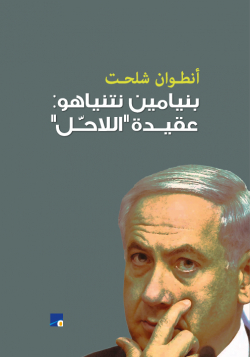 Ramallah: the Palestinian Forum for Israel Studies (MADAR) published “Benjamin Netanyahu: the no-solution doctrine”, by Antoine Shalhat. The book covers Benjamin Netanyahu’s experience, through a comprehensive analysis to Netanyahu’s political career, choices, ideological background, his effect on the Israeli political arena, the rightwing trend he represents, including his inclination to collision and expansion policy in his relations with the Palestinians.

The book tracks the main milestones in Netanyahu’s career, putting under the spot light the tools he used in what became known as his strategy to stay in power during his second and third tenures, after his resounding defeat at the end of his first term in the 90s.

The book monitors Netanyahu’s stalemate policy, which always hides attempts to “buy” more time from the Palestinians, Americans and the world, in order to enforce facts on the ground and realities that hinder the possibility of reaching an agreement with the Palestinians, so that the settlement expansion would cover all the occupied territories between the Jordan river and the sea.

The book also highlights Netanyahu’s achievements as he managed to induce internal structural changes inside Israel, as part as his relentless efforts to reorganize the political, media and legislative structures to best serve his extremist rightwing ideological project, such that “Netanyahu is totally “Judaizing” Israel, up to the point of drafting a law that defines Israel as the national state of the Jewish people”.

The book also tracks the measures of Netanyahu’s previous government (2009-2013) and the current one (since 2013) to escalate the tension, through proposing two preconditions for “Peace”; the legitimacy of the Jewish state and its security, through the tracking of its political and field practices, especially settlements.

The book subjects Netanyahu's political and security beliefs and its changes to thorough analysis through deep revision of his political doctrine as he presented in his book “A Place Under the Sun”, his ideological background, the influence of his father (in the midst of assurances that he blindly follows his father in his extremist rightwing opinions), his most prominent speeches especially his Bar Illan 1 & 2 speeches and his speech at the Institute for National Security Studies INSS conference where he focused on “Israel’s choices as the final status solution attempts have reached a dead-end”, in addition to his statements and conclusions during and after the latest aggressive war on Gaza and after its end.

The book also includes in annex a collection of carefully selected speeches that showcase Netanyahu’s programs, plans and fluxes.