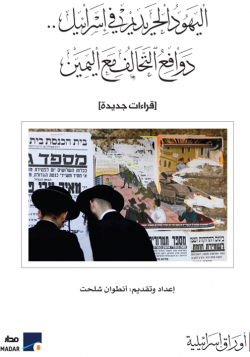 Ramallah: The Palestinian Forum for Israeli Studies (MADAR) has recently released a new issue of the Israeli Papers series, titled “The Haredi Jews in Israel… Motives of Alliance with the Right Wing”. Prepared by Researcher Antoine Shulhut, the paper includes a translation [into Arabic] of two newly published Israeli articles on the latest developments on Haredi Jews on the Israeli political stage. The paper traces the root causes of the Haredi Jews’ predisposition to ally themselves with the right wing. Informed by their positions towards Zionism and so-called “Land of Israel” and State of Israel, over the past decade, the Haredi Jews have transformed into “natural partners” with the right wing and its leader Benjamin Netanyahu.

In his article, “The Land of the Torah, The State of Uncertainties”, Researcher Dov Greenbaum traces the root causes of the Haredi Jews’ inclination towards the right wing to what is known as the “coup d’état” led by Menachem Begin in 1977 and consequent rise of the Likud party to power. As a result, the Haredi Jews have had comfortable seats in government coalitions. Ever since, the Haredi Jews have looked at Begin as the national saviour, who redeemed and turned them into allies. At the same time, the Haredi Jews have viewed themselves as closer to the Israeli right wing, which has restored the respect and glory they had aspired for a quarter of a century.

Too many attempt to claim that the Haredi Jew community is rightist. According to Greenbaum, this claim is inaccurate, however. The Haredi Jews do have other criteria and considerations, by which they decide whether to join the government or not. The right and left wings are not key to these considerations and criteria. A government that gives favourable consideration to, understands, and recognises the needs of the Haredi Jews is the one that wins their votes.

Greenabaum argues that the Haredi Jews did not leave the government coalition because of the evacuation of Yamit (an Israeli settlement in the liberated Sinai Peninsula) in the context of the peace treaty between Israel and Egypt or the Gush Katif bloc (Israeli settlements in the Gaza Strip) in line with the Gaza Disengagement Plan.

They did not part from the government because of any political plan. They did so primarily due to impingement on their religious beliefs. This was, for example, the case with Ehud Barak’s government. Neither the right wing nor the left wing concern or haunt the Haredi Jews. What matters most for them is to maintain continuity of the Jewish character of public life and public space, and to preserve budget allocations to religious schools (Yeshivot) and children.

According to Greenbaum, this does mean that the Haredi Jews would vote for left parties tomorrow. As they are not obsessed with the right wing per se, they do not have a fundamental problem with the left wing as such. For them, the right wing is good when it is on their side. The left wing might be an excellent choice when it takes sides with them. In other words, the Haredi Jews love the land of Israel, but they are not fond of the State.

This conclusion is also reached by the second article, “The Hasidism of Satmar: Against the ‘Zionist State’, not Against Zionists”, Researcher Pnina Pfeuffer casts light on Haredi groups who do not recognise the Jewish State. Pfeuffer finds out that for all Haredi Jews, the land is more sacred than Zionism, which allows them to lead a life of well-being and freedom as they want.

In addition to these two articles, the issue presents an overview of the Heredi Jews, Haredi movements, beliefs and positions, both past and present.

Download attachments:
More in this category: « Israeli Papers Issue no. 69