“Herzl, Zionism and the Jewish state” 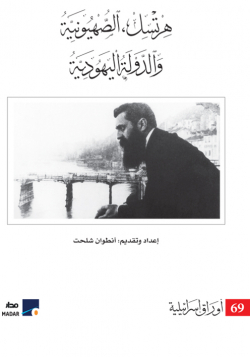 “Herzl, Zionism and the Jewish state”

{Ramallah, October 2019} Did Theodor Herzl the founder of Zionist movement wanted to establish a “Jewish state" rather than "a state for the Jews" with all the implication to Judaism and citizenhood? This question is deeply examined and explored in the new e-publication of “Israeli paper” series (no. 69) titled “Herzl, Zionism and the Jewish state”.

The paper contains two articles originally published in Hebrew and translated by MADAR, and an introduction by Anton Shulhut the “Israeli Paper” series editor.

In the first article by Yoram Hazony entitled “Herzl wanted a “Jewish State” not “State of Jews””, Hazouny argues that the founder of the Zionist movement Theodor Herzl wanted to establish a “Jewish State” instead of “A State of Jews” with all the connotations that the first term carriers that essentially connect Zionism to the Jewish religion. The predominant intent behind his argument is to refute the opinion carried by numerous persons who attempt to avoid describing Israel as a “Jewish State” and influence the use of the neutral term “A State of Jews”. This preference suggests that the best description of Israel is that it is a Jewish majority State.

The conclusion that Hazony reaches is that the claim that Herzl did not mean to establish a Jewish State, but only a neutral “State of Jews” is far from being an absurd academic issue, but is part and parcel of a continuous ideological effort to delegitimise the Jewish State as the founding idea of the State of Israel.

The equally important issue is that Herzl refused the concept of the “Citizens State” of Jean Jacques Rousseau, which is currently alluded to under the term “A State of all its Citizens”, claiming that the State, any State, does not acquire its political and ethical legitimacy through a social contract that is formed between all its citizens.

The second article, by Einat Ramon, entitled “Zionism is not Separate from Judiasm but Part of it”, addresses, from the beginning, Herzl’s position from Judaism, characterised by a positive approach to the alliance of various categories of Jews, which were therefore willing to reach internal Jewish political concessions on the issues of religion and nationalism. However, at the same time it confirms that this approach did not exclusively belong to Herzl, but rather distinguishes Zionist though from all walks of life.. as such, Zionism came to assert that what brings secular, reformist and religious Jews together exceeds what separates them and that painful concessions are not only possible and desirable but also necessary for a common life. The writer refers to the numerous debates and studies that acknowledge the position of leaders and thinkers of the radical religious camp, first and foremost Rabbi Abraham Isaac HaCohen Cook, who supported partnership and cooperation in the Zionist project despite the involvement of Jews who did not observe religious rituals and did not believe in the sanctity of the Old Testament. However, this approach was met with little interest compared with the parallel approach, which came from secular Zionist leaders and preferred partnership with Jewish Orthodox instead of holding onto the point of view that considered that the salvation of the Jews was contingent on comprehensive religious reform or complete freedom from religion.

Ramon focuses in the article on this historical decisiveness and its projections, which was adopted by Zionist missionaries and leaders in later years.

Lastly, it is important to note that these two articles were published before the adoption by the Israeli Knesset on July 19, 2018 the “Basic Law: Israel as the Nation State of the Jewish People”, which defines Israel as “…the national home of the Jewish people, in which it fulfills its natural, cultural, religious, and historical right to self-determination.” The statement by the Israeli Prime Minister Benjamin Netanyahu, following the adoption of the law, carried significance when he said that 122 years after Herzl released his vision, the basic principle of Israel’s existence as the Nation State of the Jewish People was defined in law, just as Herzl desired.