Higher Education and the Employment of Academics among Palestinians in Israel 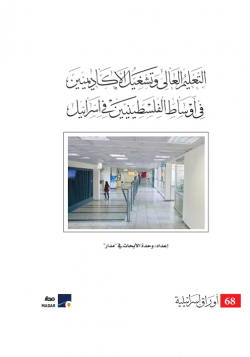 Ramallah: The Palestinian Forum for Israeli Studies (MADAR) has recently published Issue 68 of the Israeli Papers series. Totalling 72 pages, the paper is titled Higher Education and the Employment of Academics among Palestinians in Israel.

Informed by the most up-to-date statistics, the paper provides an overview of the status of education among Palestinians in Israel. Starting from the Nakba, the paper reviews historical developments of the context of education and transformations that accompanied paradigmatic changes throughout the region. It also pays particular attention to structural and cultural problems that impede the development of the education sector.
The paper shows that education is affected by the current context of deep-rooted discrimination, which reflects on the opportunities and options available to Palestinians. It also examines how Palestinians can use the already few opportunities they can access. Sometimes, limited opportunities are more a result of Israeli considerations than taking into account the needs of the indigenous Palestinian minority.

The paper presents data on the percentage of students at Israeli universities, including concurrent changes, gender, types of majors and relevance to the labour market. It also addresses the inclination to joint universities in the Palestinian territory occupied in 1967 and Jordan, highlighting the options and experience these universities offer to students.

In the introduction to the paper:
In Israel, Palestinian higher education is developing in the absence of a Palestinian Arab university, but also in the context of Israeli universities. Naturally, these universities contribute to developing the Israeli society in tandem with the Zionist perspective of development, which embraces the official narrative of the State and the Jewish group. Along this vein, Israeli universities do not impart to Palestinian students national values, love of land, or values of right citizenship. Palestinian students experience a state of estrangement, and mostly conflict with, Israeli universities. As an institution and a cultural community, Israeli universities harbour Jewish professors, students, teaching courses, educational tours and scientific research. For Arab students, the university serves as a station and point of departure in the process of social mobility. It is an agent for individual modernisation, which does not necessarily reflect on subsequent modernisation of the Arab community.

Modernisation is limited to an individual scope. Hence, the Arab academic and scientific potential in Israel has not turned into collective resources. Many academics have engaged and identified with the existing social structures.