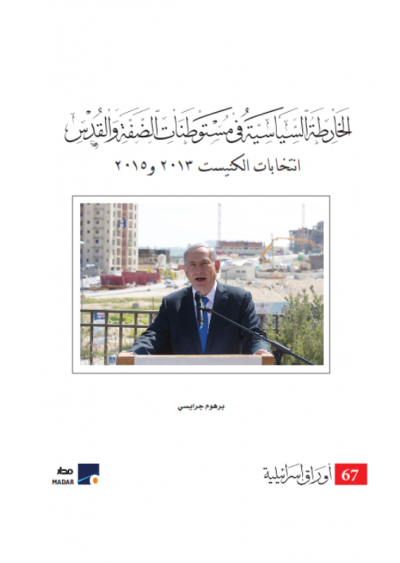 Ramallah: The Palestinian Forum for Israeli Studies (MADAR) has recently published Issue 67 of the Israeli Papers series. Authored by Barhoum Jaraysi, a researcher at MADAR, the new issue is titled The Political Map in Settlements of the West Bank and Jerusalem 2013-2015. The paper casts light on the composition and backgrounds of settlers. It presents new data that builds on what was known before about the demographic composition of settlers. In particular, major support is provided to settlements by the ultraorthodox Haredi Jews, who have started to settle on the outskirts of Jerusalem over the past two decades.

The paper is informed by an almost comprehensive survey of all settlements of the West Bank, including Jerusalem as a whole. Settlement quarters in Jerusalem and in the territory occupied since 1967 could not be left apart. The paper presents many tables, including official results of two-round elections in each settlement. It also features summary tables of each settlement category according to geographical area as well as synoptic tables of settlement categories, areas and parties.

The papers divides settlers into five groups. Distributed according to demographic composition, the first four groups include secular Jews, religious proponents of the religious Zionist wing, mixed settlements of secular and religious communities, and the ultraorthodox Haredi Jews. The last group comprises Jerusalem. Settlements are then distributed according to geographical areas in order to examine whether an area reflects ideological, political and economic backgrounds. A key finding concerns demographic aspects, rising percentage of settlers, and what groups are increasing more than others.

Regarding the settlement enterprise, the distribution of settlements uncovers a state of ideological polarisation of different goals. Comprising 33-35 percent of the total settler population in the West Bank, proponents of the religious Zionist wing settle for the purpose of settlement activity. Enjoying support from some secular Jews, these settle for political and ideological goals with a view to maintaining control over land and ensuring that the so-called “Complete Land of Israel” is established.

Exhibiting a higher growth rate, proponents of the ultraorthodox Haredi Jews represent 32-34 percent of the total settler population. By settlement, these seek to obtain closed residential communities which are close to occupied Jerusalem. Given their currently rapid pace of increase, proponents of the ultraorthodox Haredi Jews may account for half of the settler population a decade later. Secular settlers live in small settlements, including in the Jordan Valley. This category will decline at a rapid pace over the upcoming years in light of the sharp rise in the number of proponents of the Haredi Jews and religious Zionist wing.

With the exception of the Haredi and Jerusalem settlements, eligible voters in the West Bank settlements rose by almost 7 percent in 2015 compared to 2013 (i.e. over a time span of 26 months). By contrast, the voter list saw a general rise of nearly 4 percent. Haredi Jews accounted for 39 percent of the rise in the number of eligible voters between the two rounds of elections. Among religious settlers of the religious Zionist wing, eligible voters increased by 7 percent in comparison to 11.1 percent among the Haredi Jews.