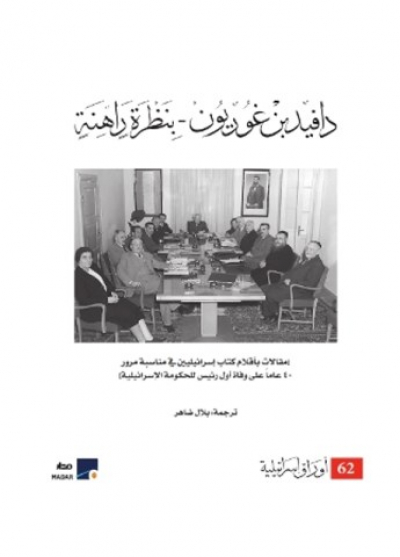 This issue contains a collection of articles on David ben Gurion, one of the most prominent founding fathers of the State of Israel, and its first prime minister. The articles are written by Israeli authors, journalists, and researchers, at the occasion of the 40th year since his death, which coincided with December 2013. They were featured in numerous Israeli media, and were translated from Hebrew by Bilal Daher.

Antoine Shalhat, the series editor, wrote in the introduction that as much attention as possible was brought towards a characterisation that could contain Ben Gurion’s legacy in most domains in which he was involved.

He also adds that Ben Gurion is considered by all article authors included here the most significant Israeli political leader, and whose persona still hovers over all actions that have been executed ever since the establishment of the state, and especially during the Nakba in 1948 and the formative years that followed it. At their forefront, these actions include the mass expulsions and systematic destruction of the Arab Palestinian villages, which rendered its people refugees, destroying its aspirations to establish a national homeland on its land.

Moreover, Shalhat notes that one of the articles confirms that Ben Gurion had been previously aware of the mass expulsions that took place in 1948. The two cities of Ramleh and Lud, as well as at least twenty other Palestinian villages had their residents expelled by force, massacres, and looting; moreover, there were mass expulsions on an ethnic cleansing scale in a number of regions; and cases of rape are suspected to have taken place as well. Naturally, there were also missions going around to prevent the return of the land's residents who fled their homes out of fear of war. And despite the fact that a significant amount of information is still hidden in extreme confidentiality in the Israeli archives, no one could claim any longer that Ben Gurion, who was an accomplice and a high authority in everything, had not ordered, had not been aware, or, at the very least, had not approved the expulsions and massacres. There are also some who maintain that those actions, were they to take place today, would be unequivocally declared as war crimes, and that the ones responsible for them would have been sued in the International Court of Justice at the Hague.