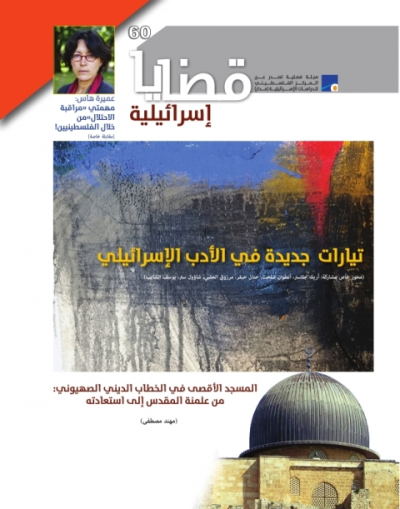 The theme of the issue #60th of the Israeli Affairs Journal is the Israeli Literary Scene in the new millennium. The issue incorporates five articles.

In his opening and central article, Eric Glasner—who is a notable literary critic—review the literary scene in Israel in recent years, and indicates three main observations he makes in the literary scene: the first is the significant rise in the writing ofa utobiographies in Israeli literature. The second is the popularity of historical novels. The third is the writing of biographies. The article then offers an analysis of the causes of this transformation,which allude to internal causes that are related to the practice of literature and to other reasons that pertain to the general socio-political context.

Shaul Setter, a Professor of literature, writes about Mizrahi poetry, focusing on a group of young Israeli poets known as “ArsPoetica” that emerged three years ago and who regularly holdevening poetry readings. The majority of these poets are of Arab-Jewish descent (as in immigrants from Arab countries), and most probably are part of the country’s second or third generation. Their poetry is charged bysocial, ethnic, and class protest. In his article, Setter analyses the group’s deliberate choice of the name “ArsPoetica” and its social and artistic significance. Moreover, the article examines the group’s social semantics, and its relationship with the current ruling establishment and with the Ashkenazi elite.

Marzouq Halabi’s article analyses the same poetic group but places it—both artistically and politically—in the broader historical context of Mizrahi protest movements against the ruling establishment. He supports the article with several translated poems by the group’s poets.

As for the critic and writer Antwan Shalhat, he presents us a reading with an exciting subject: Apocalyptic literature, or what is known as Dystopian Literature. For if Utopia was the ‘no place’ or the ‘better place’, Dystopia is its antithesis; an expression of the nightmare awaiting us in the future. Shalhat begins his article by offering us a general diagnostic surveyfor this genre, then moves into its presence in Israeli Literature, and analyses the main novels that represent this genre.

HananHaifar, a literary critic, offers us a critical reading of the latest poetic works of Haem Ghori, and wonders about the role that he played and could potentially play in the Israeli poetic scene. Haifar posits that in his latest years, Ghori seemed to have given up on the idea and the possibility of reviving the national project of the Jews, andon his vision that Hebrew Literature served to normalize modern Jewish existence. In turn, he now focuses on simpler matters of everyday life in his poetry.

In the rest theissue’s sections we find an array of subjects. Researcher and lecturer Muhanad Mustafa presents an analytical and historical study about Al-Aqsa Mosque (referred to as Temple Mount or HarHbait in Jewish literature) and its position within Zionist thought. The article represents an introduction to the study of the nature of the relationship between nationalism and religion in Zionist thought, and the overlap between them.

The issue also includes an interview with Amira Haas, an Israeli Journalist who frequently writes for Haaretz newspaper. Haas has been living in Ramallah for several years and documents Israeli violations in the Occupied Palestinian Territories on a daily basis.

In these sections we will also be reading the second part of Yousef Shayeb’s article “The New Directors,” in which headdresses the emerging trend of Israeli directors seeking to present a new approach to the history of Israel and of the Arab-Israeli conflict.

As for book reviews, Aziz Al-Asa offers a reading of “Ex-Libris: the Jewish National and University Library 1945-1955” by Gish Amit. The book uncovers the history of the Jewish National Library and the methods it used to appropriate Palestinian books following the Nakbah.

Razi Nabulsi contributes to this issue with his review of the book “A Threat from Within: A Century of Jewish Opposition to Zionism” by Yakov Rabkin, in which he narrates the history of religious Jewish movements that opposed Zionism.

Finally, in the archive section, we will read a translation of a text written by Ze’evJabotinsky, around the question of the Mizrahi Jews