year marks a 100 since the Balfour Declaration 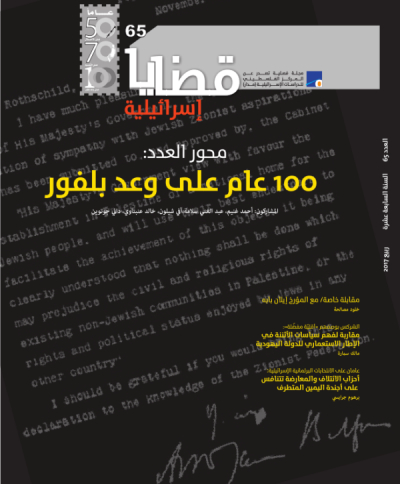 This year marks a 100 since the Balfour Declaration, 70 since the United Nations Partition Plan for Palestine, 50 since the Israeli occupation of the 1967 Palestinian territories, and we could add 120 years since the inaugural conference of the Zionist Organization in Basel. It is rather tempting to view the last three incidents as mere manifestations of a project that was planned for in Basel, and as one of the many occurrences of the 20th century in which a text translated to reality and a legend transformed into settlements. The temptation is strong but it must be resisted.

The Balfour Declaration is a triumph for a vision formulated by Herzl, but one that he failed at realizing throughout his life. Herzl believed that his project had no future without the approval of a major power, and his efforts to gain the support of the Ottomans and the Germans were to no avail. It is only at the end of the First World War that the successive Zionist leaders managed to persuade the British to embrace the Zionist project in Palestine, although the basis of support had more to do with Britain’s strategic interests and policies in the Middle East.

The declaration would not have been this significant had it not become a document adopted by the League of Nations and subsequently official foreign policy. In this sense, Palestinians were the victims of “international law,” for back then international law was the expression of Colonial powers’ wills and interests. Indeed, Palestinians will not find their robbed rights within the body of international law that prevailed at that time, but in preceding concepts of natural rights.

The Balfour Declaration became part of the British Mandate’s agenda, were it defined Palestine as bi-national country, and promised statehood to one nation while turning the other to a group of minorities that would be granted equal civil rights. But Balfour’s greatest significance lied in its recognition of the Zionist movement as the trans-territorial representative of Jewish nationalism. At that time, Zionism was not supported by the majority of the world’s jewry, and it only succeeded in transferring hundreds of thousands of Jews to historic Palestine. But the British and International recognition of the Zionist leadership and institutions settled the debate amongst the world’s Jewry as to whom represent them on the international arena. For centuries, colonial Europe Europe regarded the Jews as its ‘internal other’ and their erasure and expulsion from Europe was conditional for their recognition as a nation, but one outside of Europe.

This being said, the pathway that followed the Balfour Declaration was not imperturbable, and the United Nation’s Partition Plan could be considered as favorable to the Palestinian people compared the Balfour Declaration that reduced them to mere sects and not as a recognized nation. It was the Palestinians’ fierce resistance and the 1936 revolt forced Britain to recalculate its strategies and positions. This is not to imply that the Partition Plan was fair, for it is far from the case. It is to bring to light Palestinians’ achievements between the two wars. And although the Nakbah has rendered Palestinians as absent in history, the Palestinian Liberation Organization (PLO) and the first Intifada have successfully imposed Palestinians’ presence again. History is not a sacred scripture or a series of fatal events but an active site of struggle, and when Palestinians continuously resisted they were able to alter this scene and assert themselves as an active and important actor.

Zionism’s achievements in the span of a hundred years are plenty and noteworthy, but six million Palestinians still remain in the land of Palestine, aware of their history and identity, and their legitimate struggle is ongoing. The exiting conditions available to Palestinians’s liberation project are much more favorable than the ones that triggered Zionism’s birth. This is a thought worth observing and contemplating.

More in this category: Israeli Affairs (Issue no.64) »