the media in Israel, its relation to capital and power 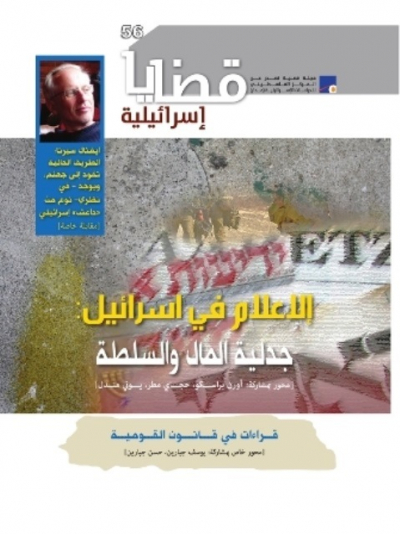 This volume of the Israeli Affairs Journal addresses two key themes. The first is the media in Israel and the second is the Jewish nation-state bill.

The contributors to the first theme address transformations of the media in Israel, its relation to capital and power, and the strategic impact of commercial journalism on Israeli media and the exclusion of partisan media. The experience and challenges of establishing a union for journalists in Israel is a key feature

of this theme. Also covered is the relationship between Israeli media, power, and the other “the Palestinian”, and an example is provided of how the Israeli media isolates life in Gaza from the reality of Israelis lives during the “protective edge” operation. An analytical report on ownership of media agencies in Israel is also included.

The current volume also presents two translations. The first examines shifts in Israel-Africa relations. The second translation is a report entitled “How and why Israel’s army has become more religious?”. An additional article included in the issue aims to analyze the recommendations of the State Committee’s report on governance in the Israeli academic institution, which was published in May 2014.

An exclusive interview is featured in this volume with Igal Sarna, who writes feature stories for the daily newspaper Yediot Aharonot. After serving as a tank commander in the October 1973 war, he was one of the ex-soldiers who founded the Peace Now movement. He states that “fantasy has become more powerful than reality, and that Israel has shifted from a state to a kingdom. Similar to the ISIS, which wants to build an Islamic State (Caliphate), Israel wants a Kingdom, and part of the Israelis is Daesh”.

The selection from the Zionist archive’s section includes an exclusive translation of excerpts of “Ben-Gurion’s Diary for the 1967 Six-Day War” that dates back to 1960. The translation presents discussions between the Mapai Party secretaries’ meetings and the government about the Arab minority in Israel, the general elections held in late 1959, and recruiting Druze in the Israeli army and the problems related to the conditions of their military service, in addition to the military rule imposed on Arab towns and villages from 1948 until 1966.

Finally, a library as well as three book reviews are presented in this volume.

Oren Persiko, On the relationship of journalism in Israel with capital and authority
This contribution by journalist and activist Oren Persiko examines the intertwined relationship between capital, the authority and media. Paralleled with the exclusion of partisan media activity, Persiko explores the strategic impact of commercial media control on the Israeli mass media. Persiko argues that the shift to commercial media has deprived the media in Israel of its capability of criticising and holding the authority to account. It has made the media a hostage of profit and loss accounts, which are linked to commercial considerations of media outlet owners. This is clear in specific cases, in which relationships joint forces to produce a domesticated media product that is incapable of criticism.

Haggai Matar, Organised action in the Israeli press: Fall, rise and major challenges along the road
In this article, writer and activist Haggai Matar reviews the experience of establishing the Israeli Journalists Association in 2011, with membership of almost 2,600 journalists. Matar also presents on successes the Association has made as well as difficulties that affected its establishment.
Matar traces the decline of conditions of journalists’ employment and capability of delivering their functions both professionally and freely. This deterioration dates back to the shift in the method of employment, which was initiated by the Haaretz proprietor Amos Schocken. In 1984, Schocken released Hadashot, the first commercial newspaper, which employed all journalists in line with individual agreements.
The author describes how Haaretz employees then failed in fighting the “little brother” and put an end to the new employment mechanism. Of these attempts, employees blocked the road and denied access to Hadashot issues out of the print shop. However, Schocken paid for helicopters to get the paper out before the very eyes of protestors. Despite the fact that Hadashot was closed down in 1993, the change it introduced to the employment of journalists has continued to be in place.

Yousef Tayseer Jabarin, The Jewish Nation-State Bill and the Jewish supremacy
The debate over the Nation-State Law in Israel was one cause to dismantle the government coalition. Although they have agreed to the constituent basis (namely, Israel is a Jewish state), allies have disagreed on formulas and relevant sources.
What are the grounds of this law? What are key provisions? How do these provisions seek to legalise structural discrimination against Palestinians in Israel? With a particular focus on provisions that entrench discrimination, the author answers these and other questions by investigating the approach by which the Jewish Nation-State Bill deals with Palestinians in Israel, and with Palestinians in general. Jabarin highlights significant expressions of this official discrimination under various provisions of the Bill. Accordingly, the national (Jewish) origin lays the foundation to enjoy privileges prescribed by the Bill. In contrast, parallel arrangements are not given to Palestinians.
Jabarin concludes that the Jewish Nation-State Bill is designed to implant discriminatory regulations within constitutional arrangements, resulting in deeper and de facto official violations against the current status of Palestinian citizens.

Hassan Jabareen, The real debate over Israel's Jewish Nation-State Bill
The “Jewish Nation-State” bill would explicitly codify such principles as ensuring a Jewish demographic majority, establishing Hebrew as the only official language (today, Arabic is also an official language), and positioning Jewish law as a legitimate source of law. The proposed bill also makes clear that Israel is a state where only the Jewish people can exercise self-determination. These are the key components of the Jewish Nation-State Bill, of which several drafts were presented by Knesset members of the government coalitions.

Special Interview
Igal Sarna, an author of the “literature of endings” in Israel, The current path takes us to hell (by Antoine Shulhut and Bilal Dhaher)
In this exclusive interview of Qadaya Israeliya, renowned Israeli writer and journalist Igal Sarna highlights that fantasy, imagined or virtual reality, has been stronger than reality itself. Sarna explains that Israel has transformed from a state into the “Kingdom of Israel”. Israelis no longer utter the State of Israel because a state is a Western term. Instead, they say the “Land of Israel” (Eretz Yisrael). In this interview, Sarna states that “a number of individuals here are - in my view - an ‘Israeli ISIS’. As those want a caliphate, these Israelis want a kingdom. Certain groups are obsessed with this, and they drag along broad segments of the society. These individuals are indifferent. They watch too much TV or spend their time in malls. Therefore, there is no longer sufficient power to resist this process.”

Article
Herman Butime, Transformations in the Israeli-African relations
This article investigates distinctive stations of the complicated cooperation between Israel and some countries in Africa. It monitors various developments that have affected the course, and culminated in the consolidation, of these relations.
Butime explains that the relations between Israel and various African countries were promoted in light of a confluence of interests and confrontation of common enemies. Butime provides a review of bilateral relations with Kenya, South Sudan, Ethiopia and other countries, where Israel found the grounds to build security partners. These have provided an alternative to compensate for diplomatic losses Israel sustained in other parts of the world.

Article
Muhannad Mustafa, The Governance Committee on Israeli Higher Education: Between academic freedom and authoritarianism
This contribution analyses recommendations of the report submitted in May 2014 by the Israeli government committee set to examine governance within the academic institution.
The committee recommendations are viewed as the last course in the process of institutionalising the relationship between the political authority and academic institution in Israel. Officially, the former tightens control over the latter. In addition to aligning higher education policies with the government policies, the committee recommendations transcend national needs, which have long been visible in higher education policies since enactment of the Law on the Council of Higher Education in the 1950s. According to the committee, the academic institution has to be consistent with government policies, not only with national needs.

Report
When and how has the Israeli army been so religious?
Written by Kobi Ben-Simhon and published in Haaretz in early November, this report investigates several phenomena that show a transformation of the Israeli military into a religious army. The report inquires if the Israeli army, which has long excluded religion from its doctrine, is on its way to becoming an extremist, religious military force.

From the Archive
Dating back to 1960, excerpts from Ben-Gurion Diary are published for the first time. The publication covers panel deliberations and discussions between the Mapai Party Secretariat and government. These addressed the issue of the “Arab minority” in Israel, voting in the national elections in late 1959, recruitment of the Druze in the Israeli army, and problems associated with the Druze’s military service. Discussions also elaborated on the military rule imposed on Arab towns and villages between 1948 and 1966.

Previews
Farid Ghanim, More than one fracture in the legend
A preview of Hillel Cohen Year Zero of the Israel-Palestine Conflict (1929). This book is distinctive not only because it challenges the Zionist narrative of the 1929 events - and largely the Arab narrative too, but essentially because it proposes an interesting finding: the 1929 events, particularly in Hebron and Safad, laid the foundation of the Jewish community and the State of Israel of its current features. These events united Jewish currents and groups, Zionist and non-Zionist, Ashkenazi and Sephardic, religious and nonreligious, under the umbrella of the Zionist movement. They also shaped a military tendency within the Jewish community and turned the opposition into a marginal minority.

Jibreel Mohammed, A preview of Abraham Leon, Material Conception of the Jewish Question
In his Material Conception of the Jewish Question, Trotskyist theorist and activist Abraham Leon (1918-1944) provides a Marxist-Trotskyist critical analysis of, and reviews, evolution of the Jewish question through its relation with class and social structure in Europe. Leon absolutely rejects the classical Zionist hypotheses, which linked the Jewish question to an enteral, racist and ahistorical anti-Semitism that is deep-rooted in Europe. In specific, Leon concentrates on the role the Jews of Europe played throughout the stages of capitalism development, special status of the Jews within the then prevalent socioeconomic structure, and their development into what he calls a “class-people”.

Khaldoun al-Barghouthi, On Atef Abu Seif (ed.), Israel’s International Relations
An extensive preview of Israel’s International Relations, edited by Atef Abu Seif and recently published by the Israeli Forum for Israeli Studies (MADAR). A group of researchers of various backgrounds contributed to this book. In this preview, Al-Barghouthi presents and highlights key concepts of various chapters of the publication.