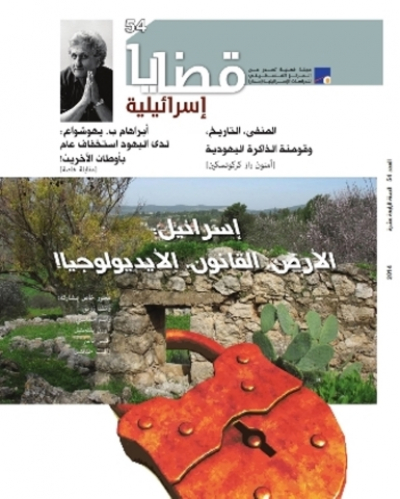 This issue of the Israeli Affairs Journal is themed around “Israel - land, law, and ideology”.

The 54th issue incorporates seven articles, of which five are themed around the disputes over land which define the conflict between the Zionist project and the Arab Palestinians’ presence in the country. The articles show how manifestations of this conflict continue to exist, causing Palestinians to suffer in their daily

lives, while also constructing their identities and national project. The conflict has transformed from the buying of Palestinian land by Jews and others in the second half of the 19th century, to a continuous, connected and programmed process that is an integral part of a national project to establish a political entity that is able to engineer people and place and to control geography and geology. In other words, to control all that is underneath and above ground.

One exclusive and in-depth interview is featured in this issue with Professor Avraham Yehoshua, an Israeli novelist, essayist, and playwright. He is a notable figure in the "new wave" generation of Israeli writers. Yehoshua emphasizes that Jews disregard others’ homelands, hence, their indifference to the toll of devastation they have been causing to the Palestinians’ homeland specifically after the 1967 occupation. Yehoshua also touched upon the role of culture in conflicts, pointing out that Israeli writers of his generation have been engaged with politics, while the younger generation has neglected this aspect.

The current issue also presents two articles the first of which is titled "Exile, History, and the Nationalisation of Jewish Memory". In this article the author analyses the ideas of “history” and “return” in the Zionist narrative in order to clarify their political and cultural projections. The second article is entitled "The Hammer, the Sickle, and the Holocaust: Hapoel Tel Aviv Fans and Secular Israeli Identity”. The article explains the prevalent discourse in Israeli football stadiums and amphitheaters. In the author’s opinion, the discourse indicates that the main conflicts are circulating around the definition of “what is Israeli”. In addition, two critical books’ reviews are presented in this issue. The first one is a review to Eitan Bar-Yosef’s book, entitled “A Villa in the Jungle: Herzl, Zionist Culture, and the Great African Adventure”. The second review is of a book entitled “Iraqi Jews: A History of Mass” by Abbas Shiblak. Also, a library is included in this issue.

Raef Zureiq, The Land, the law and the ideology: An entry point
The author stresses that a detailed review of land laws in Israel sheds light on the nature of the conflict, including stages, internal tensions, and prospects. Oftentimes, it is said that Israel is lenient on many issues, but when it comes to security it is extremely stringent. In truth, however, when it comes to land issues, “latent” Israel is more stringent and inexorable than in security issues.

Rasem Muhyi al-Din Khamaysi, The ideology, policies and tools of control over land and Judaisation of the place
Also assessing relevant reflections on Arab Palestinians in Israel, this article reviews the Israeli land ideology, including and policies tools used to implement it, before and after Israel was proclaimed. Embraced by the Zionist movement and State of Israel to control land, these ideology-based policies and tools are also currently implemented in the Palestinian territory occupied in 1967. Towards establishment of the Palestinian National Authority in 1994, ongoing policies designed to control land and engineer the place in the Palestinian territory are a continued integration of components of the hegemony process. This is also the case in Area C, which comprises 60 per cent of the West Bank area. It is essentially the same policy, which the Israeli authorities applied to the Arab Palestinian citizens of Israel under the military rule. It continues unabated, particularly in the Negev area.

Oren Yiftachel, The “Unrecognised” Bedouin space: A strategic issue
This article provides a review of stages and circumstances, which have surrounded evolution of the “Bedouin question” in the Negev area. It also explores historical, geographical and legal background and structure of this issue. With a view to reaching a solution that safeguards their rights, Yiftachel concludes that relevant government bodies in Israel need to examine and analyse the Bedouin question as a prelude to initiating a dialogue with Bedouin citizens in the Negev. Consequently, the government ensures elimination of the strategic danger and potential impact, both structurally and on the long run, on the future of relations between Jews and Arabs across the State.

Ravit Hananel, An overview of the national policy of the Israeli state in land issues
The State of Israel’s land policy is different and distinct from that implemented by any other state in the world. This policy is largely premised on the ideology of the Zionist movement and “Jewish National Fund” (Keren Kayemet LeYisrael) as well as on various justifications given to purchase land in the “Land of Israel” (Eretz Yisrael) at the beginning of the 20th century - long years before the State was established. In the 1960s, the State of Israel embraced the Jewish National Fund’s principles of land policy. At the forefront of these is the principle of national ownership of land. This policy has transformed into a Basic Law on Land. Israel is the only state in the world that has a developed economy. On the other hand, 93 per cent of the land in Israel is public / national property.

Articles
Amnon Raz Krakotzkin, The exile, history and nationalising the Jewish memory: Contemplations in the “return to history” as a Zionist idea
This article analyses the idea of “history” and idea of “return” in the Zionist discourse with a view to making clear relevant political and cultural reflections. Krakotzkin asserts that the phrase “return to history” was one way to highlight activity and historical significance of the Zionist movement. This concept is closely linked to other components of the Zionist project, where the term “return” is used; e.g. “return to the land” and “return to the origin”. Specifically, this is a return to what was imagined as a root of the authentic, national and cultural Jewish existence. All these interconnected phrases have evolved within the framework of consciousness itself, which is also articulated by the concept of “exile of the exile”.

Tamir Sorek, The Hammer, the Sickle, and the Holocaust: Hapoel Tel Aviv fans and secular Israeli identity
This bifocal examination reveals that the stadium rhetoric is actually an expression of fundamental struggles between competing definitions of Israeliness. The insights are based 1) an on-line survey conducted in September 2012 . The sample included 500 respondents who constitute a representative sample of the adult Hebrew-speaking population in Israel. 2) Reading the website of Hapoel Tel Aviv fans. 3) Collecting fans’ songs available on Youtube 4) conversations with hardcore fans of Hapoel Tel Aviv.

Special Interview
Israeli writer Abraham B. Yehoshua, the most prominent “writers of the state generation”, Jews show a general disparagement of others’ homelands! (by Antoine Shulhut and Bilal Dhaher)
Yehoshua asserts, among other things, that Jews show an overall underestimation of the homelands of others. Accordingly, Jews are indifferent to the damage and destruction they have caused to the homeland of Palestinians, particularly after the 1967 occupation. At the same time, Yehoshua emphasises that the main cause of Jewish immigration to Palestine was driven by Zionism, which evolved in 1880 as a result of the secular national state’s hostility to Semitism. Then, founder of the Zionist movement Theodor Herzl and his colleagues were obliged to think that an adjustment was not tenable and that the Jews should be moved out of the diaspora. The solution would not be to change the world, but to change the Jews and make them normal. They would have land, a country, a framework, and self-government. This goal was accomplished in the aftermath of the Holocaust. Yehoshua indicates that he supports the two-state solution. The only way is to agree with Palestinians to annex settlement blocs to Israel and to swap lands. A Jewish minority can stay within the future Palestinian state. These would receive Palestinian citizenship and comply with Palestinian laws.

Readings
Ali Haydar, Africa is here ...
A preview of Eitan Bar-Yosef, A Villa in the Jungle: Africa in Israeli Culture focuses on the golden age of Israel-Africa relations (1957–1973) and their reflection in the theatre, in literature, and in popular Israeli culture. At the same time, Bar-Yosef examines and analyses the established cultural balance, formations and cultural manifestations of the Israeli-African relations.

Khaldoun al-Barghouthi, On the displacement of the Jews of Iraq
A preview and critique of Abbas Shublaq, The Jews of Iraq: The History of a Mass Displacement (Al Saqi Bookshop, London, 2005). This is revisited version of Shublaq’s The Temptation of Zion (1986). These provides an overview of the causes that led over a year and a half to the departure of the majority of Iraqi Jews for Palestine.