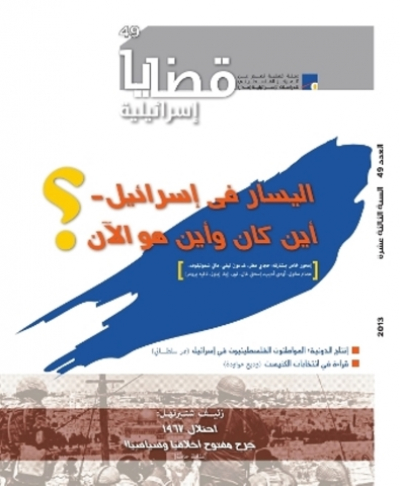 The issue leads with an exclusive interview with Mr. Zeev Sternhell, an Israeli historian, writer, and a leading expert on nationalism and Fascism. Mr. Sternhell headed the Department of Political Science at the Hebrew University of Jerusalem. He acknowledges that the Zionist project originally aimed to occupy Palestine and inhabit it with Jews, as a solution for their hardship in exile. He argues that occupying Palestine in 1948 is not a moral problem, however not ending the occupation in 1949, after accomplishing all the Zionist goals, and the consequent occupation of 1967 is, in his opinion, “the biggest catastrophe on Israel”.

An exclusive translation of a brief excerpt from the Zionist archive is a new addition to the Journal with the important sections of “Truth from the land of Israel” article by Ahad Ha'Am included in this issue. Dr. Honaida Ghanim highlights in her foreword to the article that the importance of this piece is because it is one of the first texts in which the Zionist allegations about Palestine being an empty land was refuted, it mentioned the Arab existence in Palestine, and talked about the colonialist’s superior relationship towards the Palestinians. Also, the article indicated that Ha’Am practically negated the most important Zionist hypothesis that propagated Palestine as a barren country and its population as remnants of savages. His article has later become a milestone to the Israeli Zionist which try to add a human perspective to their Zionist thinking, and insist that there is no contradiction between morals and Zionism.

Finally and in addition to the themed and general articles, the exclusive interview as well as translation, this issue of the journal includes a collection of books’ reviews, as well as a library.

Haggai Matar, A civil revolution or Zionist reactionism? (The Israeli left between social protest and parliamentary elections of the Knesset)
Gideon Levy, Where was the Israeli left and where is it now?

Issam Mikhwel, The crisis of thought and Zionist practice - Between the Zionist left and the Anti-Zionism left

Udi Adiv, Between bi-nationalism and the democratic civil nationalism

Eva Illouz, Why should the left lead Israel?

Naveh Brummer, Yes to a healthy pessimism (A response to Eva Illouz)

Wadee’ Awawdeh, A treatise on the Knesset elections

Al-Tayyeb Ghanayim, A book open to questions
From the Zionist Archive: Excerpts from Ahad Ha’am The Truth from the Land of Israel (Preface by Honaida Ghanim)