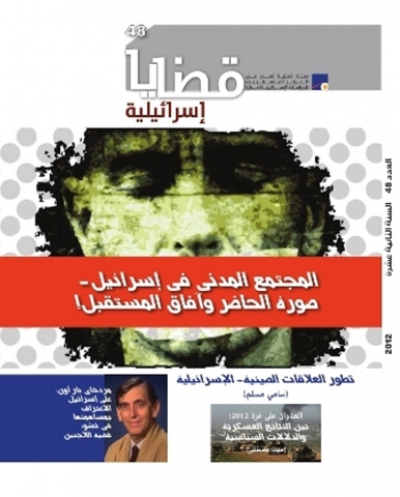 In addition, the issue contains four further articles. The first is a study of the development of Israeli-Chinese relations. The second one is by a Jewish researcher, Yehouda Shenhav, and covers the problems in translating Hebrew to Arabic and vice-versa; the article is entitled “The Politics and Theology of Translation: How do we translate Nakba from Arabic to Hebrew?”. The third one is entitled “The Aggression on Gaza 2012, the Military Results and Political Indications” and the fourth article is entitled “On the Shadow and Its Shadows”, that presents the different aspects that form the experience of Palestinian artists’ living inside 1948 area.

The issue presents another exclusive interview with the Israeli historian, retired Chief Officer of the Israeli army and former Knesset member, Mordechai Bar-On, who expresses his views on major political events that he lived through, notably the 1948, 1956, and 1967 wars. He confirms that Israel should acknowledge its contribution to the emergence of the Palestinian refugees’ problem.

A book review for Tomer Gardi’s “Stone, Paper” is included in the issue, as well as, an exclusive interview with him. The book is about the destruction of Hunin, a Palestinian village 28.5 (km) North East of Safad and the stones were used to construct an Israeli museum in a nearby Kibbutz in 1948. Also, the issue incorporates a review for “The Dream of the White Sabra”, a book by Meron Benvenisti. The book is an autobiography, through which the author tries to read and analyze the Israeli identity and the Zionist-ideological transformations.

This issue includes an exclusive translation of major sections of the Israeli Adva Center report on “The Social Situation in Israel 2012”, a review of the chapters on Jerusalem and the occupied territory of the Association for Civil Rights in Israel (ACRI) annual State of Human Rights report. Finally, Chief of Staff in the Israeli army, Moshe Dayan’s eulogy for Roi Rotberg at his funeral on April 30, 1956, is presented in this issue.

Yael Yishay, The civil society in Israel: Obstacles and incentives

Amal Jamal, The Arab civil society in Israel: New elites, a social capital, and challenge of the power structure

Azar Dakwar, The third sector in Israel: An overview

Special Dialogue - Professor Tamar Hermann: It is difficult to point in Israel’s reality to civil society movements that look forward to a substantial change!

Yehuda Shenhav, How is Nakba translated into Hebrew?

Muhannad Mustafa, The 2012 offensive on Gaza - Between military outcomes and political implications

Honaida Ghanim, On the shadow and its imagination
Special Interview - Mordechai Bar On, retired officer, historian and former member of Knesset: Israel must recognise its contribution to the evolution of the refugee issue

Crime and Punishment ... A Reading in Stone, Paper and a dialogue with author Tomer Gardi

Adva Centre Report: Image of the social situation in Israel, 2012

Report of the Association for Civil Rights in Israel, Image of the human rights status in Jerusalem and the Occupied Territory, 2012

Himmat Zu’bi, A biography of the awakening