Israel and Arab Spring, under the title “Shaking the Status Quo” 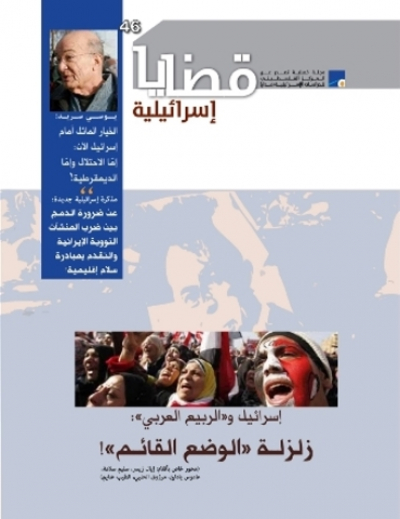 ABSTRACT
This issue of Qadayya Israelieh (Israeli Affairs) Journal focuses on Israel and Arab Spring, under the title “Shaking the Status Quo”.

This issue presents Israel’s different approaches to how it deals with the Arab Spring, at the levels of governmental institutions, active political forces among Palestinians inside Israel, and some of the active forces among the Sephardic community.

An exclusive interview with former minister, Yossi Sarid, is featured in this issue, during which he emphasizes that the Arab Peace Initiative forms a good basis to solve the Israeli – Palestinian – Arab conflict, and yet, Israel’s leaders have not seriously dealt with it so far. Moreover, they insist on not reaching a solution in order to uphold to the occupation; an approach that makes Israeli democracy vulnerable to many dangers.

A translation of Begin Center’s new paper, is also included in this issue. The paper calls for a combination between striking Iran's nuclear facilities and launching a regional peace through the Arab Peace Initiative, in order to avoid the consequences that may ensue the attack on Iran.

In addition to the theme articles, the interview, and the translated paper, the Journal includes two articles on different aspects of politics. The first one is about the political movement in Israel, which did not lead to early elections but instead led to the formation of a new united national government. The second article is about a new rightist movement named “Im Tirtzu” that aims to restrict academic freedom whilst remaining loyal to Zionism.

Finally, this issue contains two books’ reviews. The first review is of a book entitled, Re-inventing the Nation: Palestinian Intellectuals in Israel, by Dr. Honaida Ghanem. The book is the first (at least in Hebrew) to significantly and systematically highlight the Palestinian intellectuals’ role in re-constructing and re-establishing Palestinians in Israel since 1948. The second review is of a book entitled, This Regime Which Is Not One, by Adi Ophir and Ariella Azoulay. The book was recently translated into Arabic by Nabil Al-Saleh and published by MADAR, the Palestinian Forum for Israeli Studies.

Salim Salameh, The 1948 Palestinians and the “Arab Spring” - A consensus, a crack and then a split

Amos Yadlin, A year from the Arab intifada

Marzouq al Halabi, An Israeli Discretion to Grab the “Arab Spring” in the midst of Quicksand

Al-Tayyeb Ghanayim, Two dialogues on the “Arab Spring” with two Israeli young intellectuals of oriental origin
Special Interview - Yossi Sarid, minister, member of Knesset and former leader of Meretz: No alternative for a settlement on grounds of the 1967 border and partition of Jerusalem as a basis of negotiations

Yehezkel Dror: On the need to combine launching a strike on Iranian nuclear installations and proposing a regional peace initiative

Muhannad Mustafa, The ‘M Tertso’ movement: Limits of academic freedom and a new definition of Zionism

Udi Adiv, Occupation as a consequence of the essence of the Israeli regime