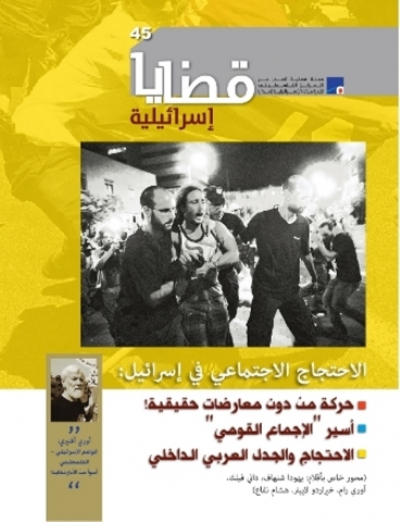 The articles review the protest movement that was launched under “the people demand social equality” slogan, and discuss the tools that were used in the organization of the protest movement and its effects on the reproduction of social order. Also, the researchers touched, each from a different perspective, on the implications of the movement on the society and state.

The Israeli protest movement was not a revolution aimed at toppling the Israeli regime, but it highlighted the cracks the Zionist and capitalist regime suffers from, and perhaps paved the way for other protest movements that may lead to the expansion of these cracks, especially given that politics in Israel, as in the Middle East in general, are not predictable.

Some of the articles emphasize that the social protest presented new options for political work, and created new democratic spaces. It also legitimized the actions of particular radical groups. Nevertheless, the protest has not offered economic nor political oppositions, and its central party has received an unrivaled national consensus, which by its nature hides and camouflages political, ideological and ethnic differences. Therefore the consensus on the protest concealed for example, the political and ethnic theme of the Israeli economy.

In addition to the theme articles, the Journal includes articles about other topics, and books’ reviews. As well as an interview with an Israeli Journalist and political activist, which presents the interviewee’s historical account on various topics, including, the memory, developments that led to the establishment of the state of Israel, and other topics.

Finally, the Journal presents “a library” that sheds the light on the most recent published books in Israel.

Danny Vilk and Uri Ram, Rise and fall of the Social Protest Movement in Israel (Until Now)

Gerardo Leibner, The Israeli summer season which was and the seasons which may come

Omar Amin Masalhah, Boundaries of the “Land of Israel” in the Torah

Amin Darawsheh, Israel and the European Union - The soft partnership

Muhannad Abdul Hamid, The Tragedy of the unholy love