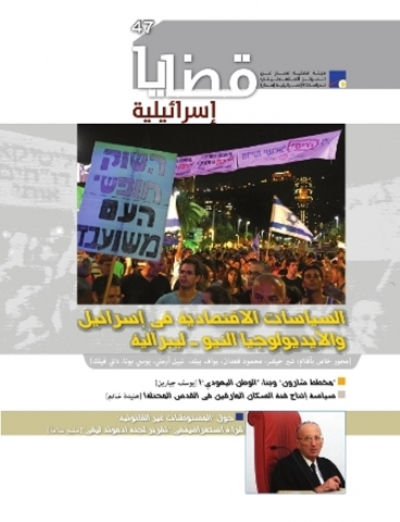 The issue includes two studies on different aspects of actions to create a dominant Israeli national mythology. The first one tracks and analyzes the colonial settlement policies that Israel produced in order to judaize East Jerusalem after the year 1967. The study focuses on the interrelations between the settlement, replacement and juidizing strategies and the policies of producing Palestinians living in Jerusalem as a renegade population, who always live on the “margins” where their presence is considered a continuous source of danger to the regime. The second study examines the state of Israel’s master-plan - known as the “Sharon Plan” after its architect Arieh Sharon, and its role in establishing the “Zionist nation” system. This master-plan details the institutional action plan that has been the most comprehensive and tangible in the history of the Zionist movement and the state of Israel. The Sharon Plan not only had the greatest influence on “the country’s image”, but also played an important role in constructing and consecrating the national legend. This mythology was built around the notion of occupying an empty land through settlements in border areas, reviving land that was “wasteland”, and collective settlement and political spirit, and the notion of “people without land for a land without people”.

The journal presents a review of the Edmond Levy Committee report that called for legalizing all settlement outposts in the occupied Palestinian territory, and for not dealing with the West Bank as an occupied area. Furthermore, the journal includes an exclusive translation of a letter from David Ben-Gurion to his son Amos, in which he revealed the real goals of the Zionist movement’s support to the Peel commission recommendations for partition of Palestine.

Finally and in addition to the themed articles, two studies, and the report review, this issue of the journal includes an exclusive interview, a collection of books’ reviews, as well as a library.

Yoav Peled, From Zionism to capitalism and vice versa - Political economy of the military neoliberal state in Israel

Nabil Armaly, “Her Majesty” in service! On the role of Israeli media outlets in promoting the neoliberal economic thinking

Yossi Yona, Paradoxes of logic: Education in Israel in the neoliberal age

Danny Vilk, The neoliberal approach to liberating the health care system in Israel

Special Interview - Minister Dan Meridor: I support the two-state solution because I care for my interest

Salim Salameh, A review of the Edmund Levy Committee’s Report on “Illegal Settlements”

Honaida Ghanim, The biopolitics of settler colonialism: Production of Jerusalemites as renegades

Ran Greenstein, An attempt to understand current Israeli policies - A reading in four new books on the society and policies in Israel

Amin Darawsheh, Characteristics of the ethocratic system in Israel - A reading in a book on Israel’s ethnic policy in relation to land and identity

David Ben-Gurion, A letter to Amos [his son]