MADAR Symposium on the War on Gaza: Israel Continues its Strategy to Manage the Conflict and Develops a New Strategy to Deal with Gaza 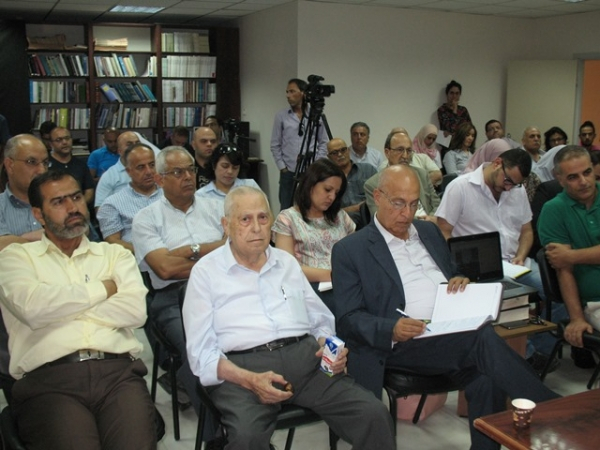 Ramallah: In a symposium organized by The Palestinian Forum for Israeli Studies MADAR titled “Israel and the War on Gaza”, on 2/9/2014, the participants said that they believe that the war on Gaza will not lead to a new political horizon. The participants noted that there has been more talk about a political solution with the Arab States that excludes the Palestinian Authority - PA, side by side with developing a new equation for Gaza titled “the PA on the margins and HAMAS in the center”.

The participants expected that Netanyahu will hold to his strategy of managing the conflict with minimal losses, noting that he didn’t come out of the war in a weak position, and that the rift within the rightwing didn’t deepen, given the rightwing’s satisfaction with Netanyahu’s performance in the issues of settlements, negotiations and ignoring the PA, given that there is no serious contender for leading the Israeli rightwing.

Dr. Honaida Ghanem, MADAR’s Director General, said in her opening speech that the discussion will focus on the Israeli readings on the War on Gaza, and its expected aftermath on the governmental and partisan levels, the geostrategic position of Israel and on Israel’s approach to the Palestinian issue.

Political science researcher and lecturer Dr. Muhannad Mustafa focused on the Israeli discussions for the day after the war, the outcomes of the official discussions, and the official visions right before the war, during it and after its conclusion.

Dr. Mustafa presented five visions that prevailed in the official Israeli medium after the negotiations stopped, and before the three settlers were kidnapped. Four of them agreed on neutralizing the PA and offsetting it from any solution, and dealing on the ground as if the PA didn’t exist.

Mustafa highlighted the vision of Yair Lapid’s (Center), who published a plan that includes an explanation of his vague political vision, and which for the first time included some executive points that can be summarized in redeployment of the forces in the areas that do not have settlements, then confidence building measures that include the evacuation of remote settlements, and finally a solution that Israel would agree on with the US, without any role for the PA and its president Mahmoud Abbas.

The second vision, according to Mustafa, is presented by Naftali Bennett from the right, who mainly spoke about annexing the West Bank’s Area “C”, which he then modified to the gradual annexation of those areas.

Thirdly, a vision was put forward by the Minister of Foreign Affairs Liberman, in which he advocated a regional solution that bypasses the Palestinian side, coinciding with some groups promoting the idea that President Abbas is not a partner.

Mustafa said that the only vision that gave the PA a role was the vision presented by Tzipi Livni, who spoke about negotiations between the two parties.

Mustafa focused on the fifth vision that also excludes the PA, which was presented by Benjamin Netanyahu, explaining it from its beginning; when Netanyahu claimed that there’s no partner on the other side, and focused on his internal and external options in managing the conflict.

Mustafa also highlighted the fact that Israel has high confidence that those visions can be implemented, and it will be possible to manage the conflict with no losses.

Mustafa warned from how the issue of the settlers kidnapping was considered a declaration of war against Israel, and it was escalated to become a support pillar to the Israeli strategy, and as a tool to disrupt the reconciliation efforts, to delegitimize the national consensus government, reinforce the “no partner” rhetoric, and to weaken the PA, whose condemnation of the event was taken lightly by Netanyahu.

On the issue of HAMAS, Mustafa noted that Israel has moved from the security-based approach to the political approach after the rift between HAMAS and the PA. Netanyahu has moved from using the slogan of bringing down HAMAS to dealing with the rift as an Israeli interest as it serves the Israeli strategy of managing the conflict. This political approach was also reflected in the indirect talks. Mustafa concluded that Israel has developed a new equation titled “the PA on the margins and HAMAS in the center” in dealing with Gaza after the war, which means the presence of the PA on the border crossings and maintaining HAMAS inside Gaza.

Researcher Antoine Shalhat presented an analysis of the aftermath of the war on the internal Israeli arena and Israel’s vision to its regional position after the war.

Shalhat highlighted that the main Israeli arguments during and after the war were between the classical rightwing (represented by Netanyahu and his Minister of Defense) and the fundamentalist rightwing. The arguments focused on the goals of the war, and whether those goals are sufficient or poor. Which means that the Israeli politics is currently comprised of a strong rightwing, a mediocre center, close to the rightwing, and that the Zionist leftwing seems to have evaporated, and that the leftwing might not make an easy comeback to its previous influence. He also noted that the leftwing assimilated with the war, and refused to take part in the antiwar demonstrations, and that the only critique the leftwing offered was the need for a political plan in addition to the war.

Shalhat said that he doesn’t expect the war to lead to the overthrow of some “big names” as the war on Lebanon did in 2006, noting that the internal investigations will be lead by the official institutions, and that it will focus on the military performance rather than civilian-political performance.

According to the opinion polls, says Shalhat, Netanyahu is still the most popular and the most capable of leading Israel and the rightwing block after the war, due to factors related to his contenders Liberman and Bennett and the demographic limitations of their electorate.

Shalhat also highlighted that Israel is currently lead by the “post-democracy” block with its two camps; the fundamentalist and oppressive religious. In addition, some fascist trends are becoming more and more visible in the political arena, and that some terms that were exclusive to the settler gangs, like “price-tag” have made their way into the governmental discourse.

Shalhat concluded by underlining Israel’s willingness to capitalize on the current regional political scene by commending “the moderate Sunni states”, as it sees itself as a partner in standing in the face of Iran and the fundamentalist Salafi groups.