In light of Nationalism Law: The Israeli Elections between Internal Struggles and Ideological Tensions 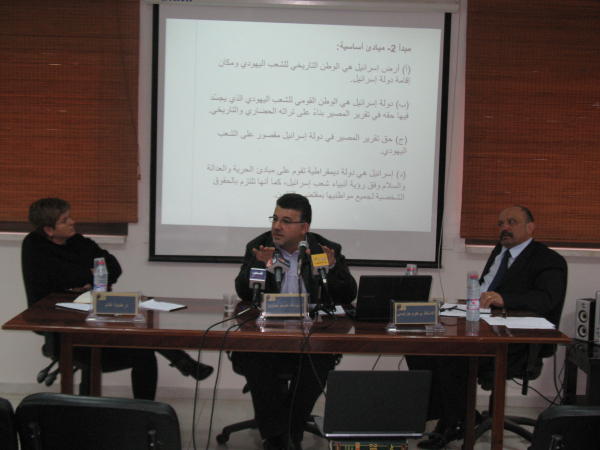 Ramallah: Two specialists in Israeli affairs confirmed the vagueness of the elections scene in Israel, despite the reflected indicators that show the advancement of the rightwing bloc in the upcoming parliamentary elections, that is due to the accelerated movement seen in the political arena and the fluctuation of politicians between blocs and parties. Both have revealed the marginalization of ideological factors, to a certain extent, compared to personal and partisan benefits, such that Tzipi Livni showed in joining the Labor bloc, and potentially followed by Shaul Mofaz.

The two researchers discussed the elections scenarios and the position of Arab parties in it, and the ability of the Arab voter to influence any change in the case of increasing their turnout percentage to be equal to that of the Jewish voters. This came in a symposium titles “In light of Nationalist Law: The Israeli Elections between Internal Struggles and Ideological Tensions”, organized by The Palestinian Forum for Israeli Studies – MADAR at its offices in Ramallah yesterday. The symposium was moderated by Dr. Honaida Ghanem, and hosted speakers Dr. Yousef Tayseer Jabarin, Director of The Arab Center for Law and Policy, and researcher Barhoom Jaraisy.

In his presentation titled “The Jewish Nationalist Law and its Political and Legal Reflections”, Yousef Tayseer Jabarin showed the integral ties between the nationalism law and the setting of early elections date in Israel.

He illustrated that the nationalism law did not come by coincidence, but came as part of a historical context that has distinguished the Hebrew State, and added: “This law came as part of a package of racist laws, harming the principles of democracy, which makes it adequate with other laws”.

He also showed that the proposal of such laws came from an evidently racist institute, which is the “Israeli Strategy” Institute that is trying to promote those laws through the Knesset Members.

Jabarin pointed out that the Institute’s vision has succeeded in imposing itself not only on the level of legislation, but also within the educational level, where new curricula and subjects have been included in line with the legal positions adopted by the institute.

He added that the Arabs inside the Green Line are not seen as an indigenous group, but as immigrants, meaning that they are viewed as sectors and not a unified group, thus they get no collective rights. According to Jabarin, these ideas and much more are found in the new law, and if not in that specific law, then it is found in others that were passed in the past years, such as the addimissions committees law or the boycott law, among others.

The positions and ideas presented in the new Israeli law contradict with the international discourse, which is based on recognizing rights of indigenous groups and minorities and giving them different rights, Jabarin said. On the role of the law in anchoring the extremist rightwing discourse, he said “The law is based on only one recognized nationalist group in all of historic Palestine, while the others are here by coincidence.”

Adding that the law is protected and cannot be annulled, except with a majority vote in the Knesset, and that “this law states that there is not equal citizenship at all.”
According to Jabarin, the international legitimacy does not allow any discrimination on ethnic, national, cultural or religious basis, therefore this law contradicts the international community’s direction. He said that even in undemocratic countries, such laws do not exist, where the indigenous land owners are not recognized.

Barhoom Jaraisy’s address was titled “Internal Struggles and its Electoral Implications” in which he said that the last Israeli elections are similar to that of the year 2003, especially with respect to the unexpected coalitions arising on the partisan levels.

Jaraisy considered that the proposal of the nationalism law has released “sting bees”, as it is not directly related to the Palestinians in the first place, but its about the relationships within the Jewish bloc. That is why the discussion of the law blew the governmental coalition, according to him, as he resorts this to the fears of the seculars from the potential religious over flow on the State and its institutions, especially in light of the recent research indicators that show a significant rise in Haredim in the next two decades.

Jaraisy concluded by saying that the rise in Arab voters to equal that of the Jews (67%), then they can make big changes in the political scene, such that a high turnover will raise the number of seats of the Arab parties in case its unites to reach a minimum of 15 seats, which could mean taking away from the weight of the right wing bloc, or maybe causing it to loose the majority it needs to form a government.