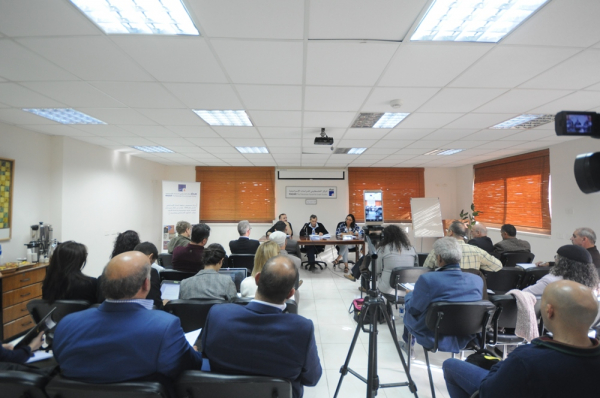 Ramallah: The Palestinian Center for Israeli Studies (MADAR) organized a symposium titled "100 Years since Balfour Declaration" in Ramallah yesterday. During the event, Dr. Said Zaidani, Philosophy Professor in Al-Quds University, gave a presentation titled “Balfour Declaration: ‘The Narrow Text and the Broader Framework’, while the lawyer, Ms. Suhad Bishara, presented "a Reading of the Zionist Settlement Colonialism in the Israeli Judiciary." The symposium was moderated by the writer Akram Musllam.

Zaidani concluded that the creation of the State of Israel was essentially machinated by the Zionist movement. He, further, noted that the Balfour Declaration, the British Mandate and all subsequent relevant political decisions constituted no more than auxiliary factors; "…for states are created on the ground; and they do not descend from heaven."

He, further, indicated that it is not true that Britain bears the sole responsibility for the Balfour Declaration, although this does not lessen the importance its role in historical terms. All European countries (and other non-European influential players as well) contributed in one way or another, in good faith or otherwise, to pushing the Zionist project forward.

Zaidani further illustrated that, whether now or in the past, moral values and principles have always played a secondary role in the decisions and policies undertaken by states. For states are entities driven by interests rather than principles, and when the two appear to be in line, it is often nothing but mere coincidence.

The interests of the victorious major powers in both WWI and WWII converged on the establishment of a Jewish state in Palestine. This is primarily what the Zionist movement wanted and worked to achieve in different ways, basically by generating facts on the ground.

In his talk about the international environment favoring the Zionist movement, Zaidani explained that France and Germany were potential competitors to make a ‘Promise’ very similar to Balfour Declaration, but the Zionist movement wanted the promise to come from Britain, since it was the greatest world power at the time, and since it had control over Palestine and significant parts of the Arab Levant (mainly Iraq).

On interconnected interests, Zaidani said that when Britain's interests so required, it decided to transform Transjordan into an emirate, thereby excluding this particular area from the Balfour Declaration. Furthermore, when interests throughout the 1936 revolution so required, Britain adopted the recommendations of the Bill Committee as some sort of a “Two-State Solution”. The same is true of the partitioning of Palestine in 1947, which was dictated by the interests of the prevailing states in WWII.

In her review of the role of the Israeli judicial system as a mean to reinforce Jewish superiority and exclude the indigenous population, Ms. Bishara returned to the beginnings, and highlighted the accentuation of the state's ethnicity in Israel’ Declaration of Independence and the subsequent "legal" interpretation, and persistence to maintain Jewish majority, which is clearly embodied in the law on "The Right of Return”.

Bishara highlighted the laws affording enhanced geographical benefit of the Jewish majority by legitimizing the expropriation of absentees’ properties, who were coercively displaced.

Bishara added that current discussion on laws such as the nation-state law is a Jewish-Jewish discussion on the efficiency of such a law, and not the rejection of discrimination as a matter of principle.

She also considered that what is currently happening in terms of land control in the Negev and elsewhere marks an actual return to the military rule era in the Fifties, and that the optimism that prevailed during the so-called constitutional revolution in the nineties is no longer existent. Bishara concluded by saying that the Israeli judicial system has always made the Palestinian identity of Palestinian a top consideration when looking into their cases regardless of the blue identity cards they hold.